Why We Need Frivolous Bad News 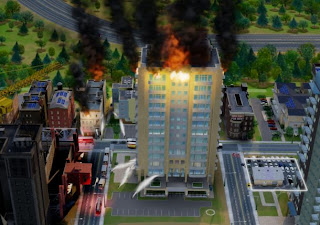 This was supposed to be a big week for the SimCity franchise. Instead, reports of the new installment's failed launch are burning across the internet. There are well over a thousand reviews on Amazon, most of them giving SimCity a one-star rating. It's all anyone can talk about, and it's become a huge PR nightmare for EA, the publisher. I have a feeling that this massive failure will be remembered for a very long time. Whether this becomes a failure on the scale of Atari's ET remains to be seen. While I doubt it will be that epic a failure, this is still pretty bad.

Why is this such a huge story? Is it because SimCity is such a cherished franchise? That could be part of it. Many of us grew up playing SimCity and other related Sim games. This franchise is almost as beloved as Super Mario Brothers, and people still play the older games in the series. To see a one-time giant fall is kind of a big deal.

There's also the fact that this failure is caused by a key new component of the game - you can only play the game with an active internet connection. If you can't connect to EA's servers, you can't play your game. Many gamers hated this idea, wanting the option to play offline and not have to depend on the often unreliable internet to get their SimCity Fix. They even brought this up to EA representatives and found themselves soundly ignored. So for some people, this is a heaping helping of "I told you so" mixed with Schadenfreude.

But I have another theory why this is becoming a huge news story. This is the kind of bad news that we need.

In the age of 24/7 news media, we can't get away from bad news. When something truly tragic and horrific happens, we all know about it pretty quickly. It explodes on Facebook, Twitter, and on every news channel.  We just can't get away from it, and after a while all this bad news can wear us down. We need a break from it all, and the answer isn't actually good news. No, the answer is more bad news, specifically, frivolous bad news.

Sometimes it helps to get completely caught up in a disaster that doesn't involve a body count, a crashing economy, or the horrid state of our nation. Instead, we need to focus on something trivial, something that doesn't really affect our day-to-day lives and yet feels like it's the most important crisis we've ever faced. We're in search of a molehill to turn into a mountain, because we need the distraction.

This is why, I theorize, that America became absolutely obsessed with Janet Jackson's "wardrobe malfunction" in 2004. Nipplegate became one of the biggest news stories ever, as every news station, every talking head, everyone in the media had something to say about it. This incident even got the government involved, as the FCC began revising rules about live broadcasts and proceeded to hand out huge fines to CBS for broadcasting the incident. In short, what should have been a two-day story, tops, resulted in everyone in the nation losing their damn minds. What causes us to be so obsessed with this story?

Yes, I'm serious. For two solid years, since the September 11th attacks, it was a nonstop stream of horrible news. The images of the 9/11 attacks were seared into our brains, and just as we were beginning to move on, we had anthrax being mailed everywhere, a sniper in the D.C. area trying to kill everyone, Osama Bin Ladin was still out there, we were bogged down in Afghanistan and the invasion of Iraq had become a disastrous quagmire. Everywhere we turned, there was just one more story about how awful things were and a reminder that people out there wanted to kill us.

We needed a break from all that, something to obsess over that didn't involve anyone trying to kill us. Then Janet Jackson and Justin Timberlake gave us a wonderful present. Her nipple popped out for half a second and suddenly it was just like old times, when the biggest outrages of the day were Presidents who fooled around with interns and celebrities doing something scandalous. It was welcome relief, a catharsis. Of course we went overboard with the story, of course we made too big a deal out of it, we needed something to take our minds off of the real disasters.

Fast forward to this week. While the SimCity launch failure isn't as big a deal as Nipplegate, it's still a huge story. Again, I think this is a story we all need. After non-stop election coverage, tragic shootings, and terrible news about the economy, we're starting to get bogged down with bad news and we need a catharsis, something to obsess over that doesn't make us want to curl up into a ball under some blankets. This might be that welcome distraction for a lot of us, a way to take a mental break for a little while.

Of course, this is only a temporary distraction. Like all such frivolous bad news, eventually the real world will rear it's ugly head and we'll have to go back to worrying about the next evil, awful thing trying to kill everyone we love. However, this brief respite is exactly what we need to recharge, regroup, and emerge rested and ready to take on what's next. After all, what good are we to the world if we're worn down and utterly exhausted?

For everything there is a season, says Ecclesiastes. For us, there's a time we need to worry about the state of the world and the very real problems we face. And then there's a time for rest and recreation, when we can be renewed and refreshed. Some of us may take a physical vacation, while others need an outrage vacation. We just need to get away from it all for a little while.

As long as we don't forget about the outside world, about these very real problems, then taking a few days to feel outraged over something minor can be healthy. So thank you EA for giving us something to take our minds off the world's problems. Next time, however, I think we'd settle for a version of SimCity that actually works.

More of my Musings
How I Got Over Myself and Learned to Love Community
Announcing my First Short Story
Quoth the Speaker
The Penny Dilema
Do You Still Call it a DVD?
Sherlock versus Sherlock
Revolution's Lost Problem
SNL Has Always Been This Funny
Rethinking my Worst Movie Ever
Your Mental Survival Kit
When Did Salt and Vinegar Chips Become Delicious?
I Love the Second Draft
Truth, Justice, and the Muppet Way
Is Seinfeld still a good pop culture reference?
Never Outgrow Playing
I Support Marriage
Busy Work Programming
We Can't Live in Fear
Posted by Charles B. French at 5:51 PM