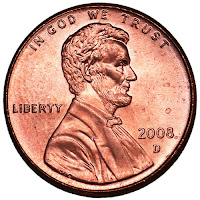 It's a trite but true statement. A penny costs more to make than it's worth. This is a classic gem, often used to point to the foibles of government inefficiency and bureaucracy. It's also true, and almost everyone has a solution on how to solve this baffling coinage dilemma. (And by everyone, I mean the people who actually think about these things, which is most likely a very small number of people. But it sounds better when I write 'everyone' so that's the pronoun I'm using.)

President Obama called for a new, cheaper recipe in the production of pennies and nickels. This would bring the cost of production in line with what the coins are worth. It would also make it less likely for amateur metallurgists to buy up tons and tons and pennies, melt them down, and use them to build giant robot armies.

However, some advocate a more radical step of abolishing the penny entirely. They argue that if we should not only stop making pennies, but stop using them altogether and instead round everything up or down to the nearest five cent increment. While on the surface that idea might have merit, the more we look at what it actually means, the more I have to say that it's an impractical idea. (The preceding sentence is my diplomatic way of calling that idea one of the most idiotic suggestions anyone has ever made and you should be ashamed of ever thinking it let alone speaking the words out loud.)

I don't know why, but I get really irritated when people suggest that course of action. We're taling yelling at the TV and radio irritated. I can get passionate about other issues as well, from gay marriage to movies that are so bad I pretend they never existed. But why is it that I have so much vitriol for a debate about the penny?

I think it's because I have yet to see anyone actually propose the easiest, most common sense solution. For some reason, the fact that everyone in this debate misses the most blindly obvious solution irritates me to no end. Because the solution is so obvious, so easy, the fact anyone would make another suggestion offends me to the core. What is this solution to the penny dilemma, you ask? It's simple.

Make fewer pennies, only make them every few years, and keep using the ones we already have in circulation.

That's my plan. It's the easiest plan of all. Take what you're already doing and just do it less. No muss, no fuss. It's always easier to just do something less than it is to change the way you do things entirely. It requires very little effort, but the rewards (all the money we'd save) will be immense. Once again, laziness and inaction are here to save America.

Now why is my plan better than the others? Again, let's start with the appallingly wrong plan to abolish the penny and round everything up. First of all, if we abolish the penny entirely, what do we do with the ones we have. There are about two billion pennies in circulation. Will they just remain out here in the wild, sitting in jars, ash trays, and seat cushions for all eternity? That seems like a waste. Perhaps we'll be encouraged to turn them in, but that not only requires work on our part, it also means that the government will be spending more money to take them out of circulation. That seems like a bigger waste.

Making fewer pennies, and making them every few years is the better plan. As I said, there are plenty of pennies already in circulation, some of them dating back to when Nixon was President. (For those of who who don't pay attention in Social Studies class, that means they are at least 40 years old.) Coins can last a really long time, so we don't really need to keep making them. Let's take the advice of our mothers, who told us to play with the toys we already have because there's no need to get us any more. In fact, we have too many already.

If we reduce the number of pennies we make, and we only produce them every two or three years, then not only will that save us money, it will mean we'll start getting a lot of use out of those pennies we still have. Plus, with the advent of Coinstar, it's so much easier to turn all those lose pennies into folding money, which will help keep those pennies circulating.

That's the first reason my plan is better. Now, let's look at the even more ignorant idea of rounding everything to the nearest nickel. Yes, that idea sounds good in theory, but we live in a consume based economy. Do you know how long it would take to go through each and every item in each and every store and round them up or down? It would be a very expensive undertaking, and the result would be that most of the prices get rounded up because stores and businesses will pass on those expenses to you, the consumer.

Plus, if the government abolishes the penny, that will be a huge government mandate that everyone changes their prices. This is quintessential Big Government, and it will be a lot more trouble than it's worth. Especially when you consider that not everyone is going to do it. What happens then? How will the government enforce the 5 cent rule? Will there be fines? Jail time? Again, enforcing these rules will cost more money, rather than less.

The idea of rounding prices up and down also doesn't make any sense when you consider tax. Even if we got all the prices in the world to a 5 cent increment, that goes out the window when you add in sales tax. What's the policy going to be there? Will we also round amounts after tax? Will tax simply be included in all purchases, automatically added into the price of everything?  Again, this creates a lot of needless complications.

Finally, the rounding argument only makes sense in a world without plastic.Many of us don't even use cash anymore, preferring debit and credit cards. (Some people still go into a store and pay by check, and if you are behind them in the checkout line, you hate those people.) Abolishing the penny no longer makes much sense when more and more transactions are electronic in nature. We are slowly becoming a cash-less society, rending penny arguments obsolete.

All this to say that there is a single, logical solution to the old debate about what to do about the penny. It's the easiest, most cost-effective method, and it's simply to make fewer pennies and use the ones we've already got. It's that simple, and I don't get why more people can't grasp that easy concept.I hope you enjoyed my two cents on the issue. (Yes, that's how I'm concluding, get over it.)

More of my Musings
Do You Still Call it a DVD?
Sherlock versus Sherlock
Revolution's Lost Problem
SNL Has Always Been This Funny
Rethinking my Worst Movie Ever
Your Mental Survival Kit
When Did Salt and Vinegar Chips Become Delicious?
I Love the Second Draft
Truth, Justice, and the Muppet Way
Is Seinfeld still a good pop culture reference?
Never Outgrow Playing
I Support Marriage
Busy Work Programming
We Can't Live in Fear
Comparing the Spider-Man movies
Advantage: Print Books
My Zombie Plan
Posted by Charles B. French at 7:24 PM

Email ThisBlogThis!Share to TwitterShare to FacebookShare to Pinterest
Labels: cash, debate, nickel, pennies, pennies cost more to make than they are worth, Penny, plastic, rounding