Star Wars and the True Gospel 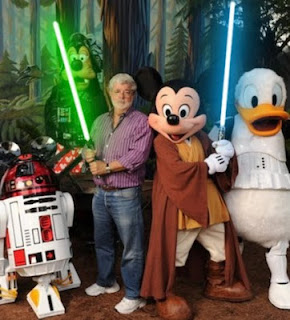 Last year's surprise news that Disney bought Star Wars sent nerds to the internet in droves. Some loved the idea of new Star Wars movies, others denounced the move as a naked cash grab, and many more argued about whether Disney would even do the franchise justice. Those arguments haven't died down (nor will they ever, welcome to the internet) and they will only intensify when the movies actually premiere. So why all the fuss? After all, they're just movies.

Calm down, internet, I was being rhetorical.

Star Wars is more than just a series of movies. It is a cultural force that shaped the last few generations. Even if you've never seen the films, you've no doubt seen their impact. Star Wars is everywhere, influencing modern directors and filmmakers, scientists, and even politicians. Don't think churches haven't been influenced either, as countless pastors have used the saga's themes of good versus evil, sacrifice, and redemption in sermons.

Which is why the news of Disney's acquisition of Star Wars is making people nervous. Many of us still feel burned by the prequel trilogy, and now we fear that things will only be worse with these new Disney movies. These are our stories, the stories we grew up with, that guided us. Our biggest fear is that Disney will tell those stories wrong.

And there's the issue. We feel that these stories belong to us, not Disney, not even George Lucas. Star Wars is ours, it belongs to the fans, those who truly get it. The feeling about the Prequels is that Lucas lost his way, that he forgot what Star Wars was all about. Therefore, to some, it's right that Disney takes up the message. Perhaps they can be more trusted with this sacred story.

This is not a new situation. Comic fans cried foul when Disney acquired Marvel several years ago. They feared Disney would destroy the brand, but instead the comics are still going strong and the Marvel movie franchise is one of the strongest ever. Any fear that Disney would ruin the Star Wars franchise should be allayed with The Avengers, one of the greatest superhero films of all time.

Not everyone was pleased. They held to the idea that these comic stories were and are too sacred to be entrusted to just anyone, least of all Disney. Not everyone is a fan of The Avengers and some believe that Marvel took a steep nosedive when Disney took over. We're going to hear the same arguments about these new movies, that Disney ruined them, no matter how good they might be.

Consider me someone who is cautiously optimistic. First, the best Star Wars movies had other people involved besides George Lucas. (Lucas didn't even direct Empire Strikes Back, arguable the best in the entire series.) So perhaps outside voices are a good thing. Sometimes one can get so cloistered that he/she loses perspective. Sometimes you need outsiders to tell the story, as keeping it too in-house can produce terrible results. It's the echo-chamber effect, where the only other voice you hear is yourself agreeing with you.

I think that Disney knows how important these stories are, and they are taking great pains to tell them well. (Besides, the better they are, the more profitable they are, so there's that.) Lucas is still involved, but now his ideas are tempered by others. Together, we might have a true iron-sharpening-iron collaboration that will produce great fruit. Not everyone will be happy, but that can't be helped.

Naturally, I see a parallel with the message of the Gospel, specifically in the argument over which version is the best and who gets to tell it. The early church quickly disagreed on who got to tell the story of Jesus, particularly when it came to the disciples who walked with Jesus versus Christians-come-lately like Paul. (A few still held grudges for that whole Paul leading the charge to arrest and kill a bunch of them.)

Ever since, Christians have had some slight disagreements about telling the Gospel story the right way. You think today's flame wars are bad, we used to burn people at the stake for having a wrong opinion. (With the Spanish Inquisition being Christianity's 4chan.)  When Martin Luther got sick of the Catholic Church telling it wrong, he made a message board post about it and started the Protestant Reformation.

Even today we still have doctrinal disagreements with our fellow Christians. We usually agree on the core, Jesus being the Son of God and dying for our sins, but how we tell it -what we emphasize and what we don't- changes depending on the teller. We can also get incensed when someone comes out with a new version of The Bible, grousing something about reboots and declaring that the version we had was just fine and there's no need to fix what isn't broken.

Like George Lucas, we Christians can get so caught up in what we think the story should be that we begin to actually miss the point. We forget what it means to people outside out Christian bubble and the true power of the Gospel. We get caught up in the way we tell it that we shout down anything new for no other reason than it's different, while remaining completely clueless as to why we just can't relate to people anymore.

New blood is good for us, even though it can be a scary thing. We need to be open to new perspectives, but that doesn't mean we just wash our hands of everything. George Lucas is still involved, because Star Wars is his baby and he knows the story very well. However, he is acting in his capacity as elder, guiding the new voices but letting them find their way. If all goes well, these new Star Wars films will be great, and quite frankly, be what the prequels should have been.

There's the lesson. We must be willing to let go of things and not insist that our version is the only one. We must allow new perspectives while being a tempering presence. And we must realize that in the end it's not about us, we are just the caretakers. The story will be around long after we're gone.


Christians and the Zombie Apocalypse
Finding God in Wrath of Khan
Horribly Offended
The Gospel According to Harry Potter
How Christians Can be OK with Gay Marriage
What an atheist taught me about faith
Anti-heroes of the Bible
There's Never a Final Showdown
Posted by Charles B. French at 9:21 PM