Rethinking my Worst Movie Ever 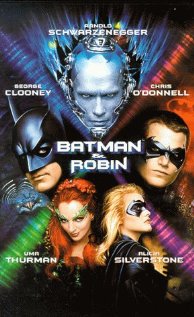 My wife and I caught Batman & Robin on television the other day and decided to watch it. Ever since it came out, I've always maintained that this is my least favorite movie of all time, not only because it was so disappointing but also for nearly killing the Batman franchise. (And yet again why we are so thankful to Christopher Nolan. Hail Nolan! Hail!) It was truly bad.

Sitting down to watch it again, I am struck that this movie is even worse now than when it came out, partly because of the Nolan films. The dialogue is still utterly atrocious, the acting too over-the-top, and the villains terrible representations of their comic book counterparts. (Especially Bane.) And yet, while watching it, I realized something, a truth that so many others have discovered while I stubbornly nursed this decades old grudge: it's actually a fun movie to watch in a so-bad-it's-good kind of way.

I am no stranger to this phenomenon: films made in earnestness that failed so hard they became awesome for other reasons. Plan 9 From Outer Space. Manos:The Hands of Fate. Most Nicholas Cage movies. They develop a cult following because of their stupidity and are, in fact, celebrated because of it. Such movies were the bread-and-butter of Mystery Science Theater 3000 and are still a huge part of Rifftrax. Bad movies can be fun in the right context.

I refused to admit that this film belonged in that club. Time did not heal this wound for two whole Presidents, but I decided to give this movie a chance and see if it was still just horrible but bad in a good way. I must say that I'm now turned around on the subject. It's still a bad film, but I think I can enjoy it for it's terribleness, to marvel at how just when you think it can't get any worse, it does. This is a film to be enjoyed with a large group of friends hurling abuse at the screen.

No one is to take this at all seriously, nor should there be any lingering anger over just how awful it was. We look back on the spectacle as a cautionary tale, an object lesson on how not to make a superhero movie. Those were simpler times back then, before Brian Singer and X-men showed us that these movies could actually be good, before Christopher Nolan gave Batman back to the people, before Marvel accomplished the impossible with Avengers. it can be forgiven its ignorance.

The thing about this movie is that it could have been better. Now that this movie and I are on speaking terms, I am seeing one thing that would have improved it 100%. The problem with Schwarzenegger's portrayal of Mr. Freeze is that he was too over-the-top and trying to chew the scenery. He was playing it up like the goofy villains in the 1960's Adam West series. If he had just delivered the same exact dialogue in a cold, emotionless manner, like his animated counterpart, it would have been better. The cheesy cold puns would have been a little more menacing, as would his casual disregard for human life.

See? I'm offering constructive criticism rather than bile and hate. I've moved on and now have a new-found appreciation for a movie that set the bar for horrible superhero movies. Now we have a simple metric for determining just how bad a movie is. It could be like Green Lantern or Superman Returns, bad but not that bad. It could be the special kind of awful on the same scale of Batman and Robin. Or it could be the rare gem that is actually worse than Batman & Robin, not even enjoyable in an ironic sense. Two movies spring to mind for this category: Spider-Man 3 and X-Men 3 (aka The Last Stand).

The reason I consider these two movies far worse than Batman & Robin is because they completely ruin the setup of the first two films in their respective trilogies. Both the Spider-Man and X-Men movies had a solid first film and an even better second. Both carefully set up the third installment, and then both completely failed to live up to that promise. Of the two, however, I'm going to go with X-Men: The Last Stand as being my new worst movie of all time.

I can't watch this movie ironically. The failure isn't funny, but sad and maddening. This was partly due to studio heads interfering too much, but a big reason for its failure was Bryan Singer leaving to direct Superman Returns. Without him at the helm, his vision was severely compromised. (And his poaching of James Marsden for Superman is why the studio killed off Cyclops.) In the end, what should have been the end of a fantastic trilogy became a muddled mess that flipped off fans of the first two movies. If you've seen it, you know what I'm talking about.

It's the Godfather Part III of superhero movies, and now, officially, the worst movie I've ever seen. As for Batman & Robin, it's good, campy fun that will endure as an ironic classic.


Your Mental Survival Kit
When Did Salt and Vinegar Chips Become Delicious?
I Love the Second Draft
Truth, Justice, and the Muppet Way
Is Seinfeld still a good pop culture reference?
Never Outgrow Playing
I Support Marriage
Busy Work Programming
We Can't Live in Fear
Comparing the Spider-Man movies
Advantage: Print Books
My Zombie Plan
The Enemy of Good
The Madagascar Problem
Can I be part of the conspiracy?
Why we should care about The Oatmeal
Games as Literature
Posted by Charles B. French at 6:26 PM