How I Got Over Myself and Learned to Love Community 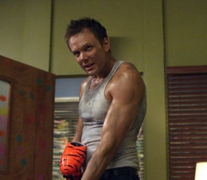 Confession time. I didn't like Community when it premiered. Not because it wasn't a good show, it's quality was never an issue with me, but because I actually teach at a community college. This show was invading my home turf, and I didn't appreciate it. Just from the promos alone, I knew I would hate it and spend all my time pointing out to whoever would listen that "real" community colleges aren't like that at all. (I can be insufferable like that.) So rather than waste my time with an inaccurate portrayal of my workplace, I smugly ignored it.

Some of you want to smack me through the internet, don't you? Don't fret, I did not remain in the Darkest Timeline.

After some soul searching and introspection (and one of my favorite shows referencing it in their opening titles) I realized that I may have been mistaken about Community. Perhaps my pride got in the way and I dismissed what would have been a fun television experience because they didn't get it "right." I decided to borrow the first season from the public library (thanks, taxpayers) and watch an episode that everyone was talking about: Modern Warfare, the legendary paintball episode. If I liked it, then I might like the show.

Twenty-two minutes later I was a diehard fan.


Why wouldn't I love the show? I'm a geek through and through, and this show met me at my geekiest. Whether it was an allusion to zombie movies, Die Hard, Predator, Apollo 13, Ken Burns, Law & Order, Star Trek, 80's video games, or anything else, I gobbled it with glee. (Oh, and they rip on Glee.) Abed's obsession with Cougar Town mirrors my own, but the best reference is the season three recurring character of Inspector Spacetime. It's the Community version of Doctor Who, and it's beautiful.


This show makes my geek heart pitter-patter, and part of me can't believe that it made it this far. Arrested Development didn't make it this far, and don't get me started about Firefly. (In fact, don't get ANY Joss Whedon fan started about Firefly. It may be over ten years old, but that wound is still fresh.) This is a show too smart to have any right to exist on network television. Yes, I am aware that this fourth season could be its last, but the fact that it made it this far is amazing. (Two more and we get our movie.)


I could go on making sly allusions other die hard fans will get, but it's time for me to get serious and introspective. (That makes me Hawkeye.) Why was it that I resisted this show for so long? That this show was a geek's paradise was no secret. I'd heard about the paintball episode, claymation Christmas, the Darkest Timeline, and even Inspector Spacetime. Why, in the face of all that, did I resist?


It goes back to pride and stubbornness, two big flaws in my character. I was so convinced of my righteousness about how WRONG the show was in its depiction of community college. (That's right, I used all caps.) Despite the fact that every other show I know and love takes liberties all the time with reality, this was the line. This was the principled stand. This was Sparta!

I couldn't get past my own need to be right to see the forest for the trees. Of course this wasn't what normal community colleges were like. That was the point. The show was playing with the High School show format by taking many of the same tropes and applying them to a community college setting instead. It is a brilliant case of juxtaposition, one that I would have noticed had I not had a hissy fit. (I wanted to write something more dignified, but it wasn't dignified. It was a hissy fit.)


I can be my own worst enemy sometimes. I get caught up in my own world, my own way of doing things, that I refuse to let anything in, even if it's exactly what I want. I can be more invested in winning an argument that I don't see what I'm losing. I can miss out on the simple fact that I'm the only one having the argument in the first place. I worry too much about protecting these big walls I build around myself, at times being proud of high high they go.


But all I'm doing is keeping everything and everyone else out. I deny myself new and wonderful experiences, and I miss out on so much because it doesn't match my definition of how it ought to be. I can get so caught up in my ruts, by predictable patterns, and I miss out on everything. I wind up hurting the people I love and care about because I'm scared of changing anything in these walls. They want in, but I don't always let them.

Sometimes it's fear that makes me do this. Bad experiences, failures, and memories of past hurt make it easy to just hide behind these walls. I don't want to venture out because I fear what I might find. And while that might avoid having to deal with messy and uncomfortable failures, I also miss out on all the joys of life, the messy, unpredictable, uncontrollable joys. I don't like being the guy behind his walls, ignoring what is so easily in reach, and I know I have to change.

This was more than just realizing that I had wrongly judged a television show. This was a life lesson, one that I should probably heed. Not all life lessons use tributes to 80's video games, so I'm going to count myself fortunate that this one did. Otherwise, I might find out what it's like back in the Darkest Timeline, and I'm pretty sure I wouldn't like it.