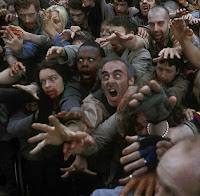 I've written before about zombies and our penchant for making plans when they inevitably rise. As a society, we're obsessed with zombies and can't seem to get enough of them. I'm just as guilty, given my habit of including them in all aspects of my writing.

Many people have these elaborate zombie plans, where they'll go, what they'll do, how much ammunition they'll need. They watch every zombie movie, read every zombie book, and make sure that they don't make any of the same mistakes. I can appreciate that kind of planning. I also have a plan for when the zombies arise.

Sadly, I am not the unlikely underdog who manages to beat back the relentless zombie hordes. Nor am I the survivalist who creates a zombie-proof fortress and rides it all out. No, I've got a delicious brain and will be first on the menu. At best, I will join the shambling army and dead-man shuffle in your direction. I find that scenario highly unlikely because I doubt there will be that much left of me.

I've spent my entire life enriching this brain of mine. I read, I learn, I write, I do all manner of things that make my brain delectable. Consider this a humble-brag, but there's no way any zombie in a 10-mile radius will be able to resit my gray-matter. And I don't blame them. My last thought before being inevitably devoured will be that at least these zombies have good taste.


I know that I could try to zombie-proof m brain by watching endless hours of Maury Povich, Jersey Shore, or anything to do with a Kardashian. However, the cure is worse than the disease, which is why I will continue to watch Mythbusters, Doctor Who, and The Daily Show. If the risk of having my brains eaten is the price I pay for intellectual stimulation, then I guess I'm on the menu.


Even if, somehow, I survive the initial outbreak and join up with a rag-tag group of fighters, I know I'm not making it to the end. I'd like to think that making it through Resident Evil 4 on Normal Mode makes me some kind of zombie-killing expert, but the truth is that in a real-world zombie fight, I'm going to be mostly useless. My true contribution to the group will be the guy whose death inspires the rest of the group to try harder to survive.


The good news is that I'm going to be in good company. If the zombies truly take over, then most of you reading this will be dead. Or undead. The point is that all your well-thought out zombie plans will likely do you little good in reality once the dead rise. Plus, just because you've thought about it and LARPed it doesn't mean you will be able to handle the real deal. Just because you've played Call of Duty doesn't mean you'd be able to handle actual combat. It's a lot different when the threat is real and there are no do-overs.

I remember the first time I sat at a table, rolled some dice, and entered the world of D&D. I was so confident I would be great at this the first time out because I'd played video games all my life. However, D&D is a game with no save points or reset button. If you screw up, you die permanently. That realization completely changes how you approach the game, and suddenly you are a lot more cautious and careful when before you would have charged ahead Leeroy Jenkins style. It's a lot more unnerving than you realize, and in the end, it's still just a game.

A zombie apocalypse would be very real and very lethal deadly. I'm am almost certain I won't survive, and I am pretty sure you won't either. Our only hope is that the threat is contained well before it starts, and based on this excellent analysis, that's a real possibility. While I wouldn't last long in a fight, a war of attrition is another matter entirely, and that I'm certain I could survive.

Otherwise, if the zombies burst down my door, I'm a goner.

When I'm not thinking about how the zombies are going to kill me, I'm writing books.
Read my first book here.

The Enemy of Good
The Madagascar Problem
Can I be part of the conspiracy?
Why we should care about The Oatmeal
Games as Literature
Getting my Money's Worth: Video Games
That Dreaded First Draft
Shaky Cam is the Tool of the Devil
Posted by Charles B. French at 11:00 AM