This Open Letter to Christians worried about their "Religious Liberty" 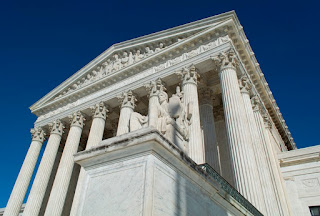 Many of you are freaking out about the Supreme Court ruling that gay marriage is a right, and thus legal in the United States. If you are worried about your "religious liberty," then I have something I need to share with you.

You really should have paid closer attention to what Jesus taught. He taught us the Golden Rule, which boils down to "treat others as you would like to be treated." This command tells us to think about how we treat people and ask ourselves if we would like it if our positions were reversed. If we were on the receiving end of our own behavior, would we like it?

As you consider that, I want you to consider this. Over the past decade or so, we Christians have spent millions upon millions of dollars supporting legislation that restricted the rights of gays. We Christians fought tooth and nail to ensure that gays were second class citizens. That's why I ask, is this how we would like the gay community to treat us? Do we want them to devote a decade and millions of dollars to take away our rights?

Of course we don't. In fact, now that the pendulum has swung the other way, the new mantra of these Christians is: "Please don't treat us like we treated you."

That's why as soon as the Supreme Court made their landmark ruling that finally overturned all the bigoted and ignorant laws preventing gay marriage, Christians immediately swung into "religious liberty" mode. The same groups that had no problems with gays being denied basic equality are now worried that they might find themselves in an unpleasant situation.

Now, before I go any further, I want you to know that I am not here to gloat or rub anything into your face. I'm not taking pleasure in your disappointment and discomfort. Instead, I want this to be a teaching moment, because this lesson is too important to ignore.

For far too long, we Christians have been awful bullies when it comes to gay rights. When we had the upper hand, we used their political power with glee. We weren't worried about the "religious liberty" of people who were in favor of gay marriage. We didn't seem to care about the rights of churches that wanted to marry same sex couples. Instead, we decided to force everyone to obey our rules and use the power of government to impose our beliefs onto everyone. Even if those people did not share our faith..

We didn't care how much we were hurting others, but we really should have. While many chose to latch onto Leviticus, perhaps they should have taken a closer look at these verses instead:


The message in these verses is clear. If we devote ourselves to passing unjust laws, legislating against others we don't like, should we really be surprised when it happens to us?  When we condemn others for not living like we want them to, we shouldn't be surprised when others condemn us. Live by the sword of inequality, perish by the sword of inequality.

We were warned, repeatedly, and yet we persisted in out beliefs that injustice was all right when we did it. Make no mistake, the legislation we passed against gays was unjust. We wanted gays to be second class citizens, and that was unjust. And we pursued that injustice and ignored the Golden Rule, as well as these teachings:


Are we starting to see a theme? Had we listened to those verses, instead of right-wing politicians who appealed to our base nature, we wouldn't now be facing a huge potential legal backlash. Your pride led you to this place, and now you're facing a large fall. (Proverbs 16:18)

Now, for the record, I do support the religious freedom of every church, synagogue, temple, mosque, or any other house of worship to choose who they will and won't marry. Despite what many of you have sown, I don't believe your rights, in your own churches, should be infringed. And here's the deal, neither does anyone else. Anyone telling you that churches and pastors are in danger of being sued is either ignorant or lying.

However, I can't help but be exasperated at all the bleating and wailing and gnashing of teeth about the supposed assault on religious liberty. First of all, as I asked before, do we really want to make Christianity into the anti-gay faith? Is that what we stand for? Second of all, no one is preventing you from being whatever Christian you believe you need to be. No one is shutting down your churches. No one is preventing you from preaching. No one is imposing on your ability to get married. You have been largely spared the whirlwind.

Now, if you are a Christian operating in the public sphere, or in a government function, you should face legal penalties if you act in an illegal and discriminatory manner. And that's something I do support, because you don't get a pass for discrimination if you cite religion.

So what do I want Christians to do instead of whine about religious liberty? (And yes, you are whining. Stop it.) Perhaps some self examination about how we treated gays over the years and the actions we took against them. We must repent of pride, arrogance, selfishness, of letting politicians whip us into a hateful frenzy. We must also continue to apologize to the gay community for all the wrongs we have committed against them.

Finally, we must take time to reflect on what it truly means to be a Christian. Does it mean flexing our political muscles in an effort to hurt people with whom we disagree? Does it mean a lot of self-centered whining about losing our privileged status in society? Or does it mean following the teachings and example of Jesus, who wasn't concerned with passing legislation, or even many of the religious rules and strictures of His day, and instead devoted his life to loving others?

The choice is yours. But please, do yourselves a favor and stop acting like you are living in the End Times or that not being able to prevent gays from being married amounts to persecution. You only embarrass yourselves when you do that.