Harry Potter and the Hindsight Bias 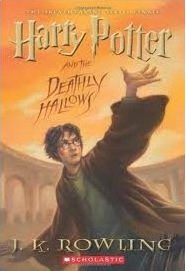 I will proudly declare my love of the Harry Potter novels. I got into them well before the first movie came out, back when there were only 4 books. What began as a lark, wondering just what everyone saw in these British imports, quickly turned into a literary addiction by the end of the first chapter of the first book. I was hooked, and those years between novel releases were long. (Of course, Harry Potter readers have nothing on fans of the Dark Tower or Song of Ice and Fire sagas.)

As a writer myself, I am hugely envious of what J.K. Rowling was able to accomplish. She crafted an amazing seven volume series, which is already becoming a classic staple of English literature. Generations of children will tear into the world of Harry Potter much the same way previous generations enjoyed the Chronicles of Narnia, Lord of the Rings, and the Chronicles of Prydain. Not only are these books good, they inspired a love of reading into a generation of children. It's hard to argue with that kind of success.

Except now, seven years after the publication of the final Harry Potter volume, Rowling regrets one of the biggest plot points of the series. (I should warn you that some spoilers will follow. If you haven't read the books and want to remain unspoiled, I suggest you log off the internet entirely, lock yourself in a secure bunker, and read all seven books. Because otherwise you will be spoiled.)

Her biggest regret, it seems, is the pairing of Ron Weasley and Hermione Granger. Seven years later, she feels that Harry Potter should have gotten together with Hermione. "I wrote the Hermione/Ron relationship as a form of wish fulfillment," Rowling says in an upcoming interview in UK Magazine Wonderland. (She was interviewed by Emma Watson, who played Hermione in the films and guest edited the magazine.) Naturally, this revelation has caused a stir among fans.

The first question one might ask is how this changes the series. That's the thing, though, it has little, if any, impact on the books. The books are written. We've read them. They are part of the culture now. As much as Rowling might want to change them, there's very little she can do about it. I mean, canon is canon.

But is it? After all, comic books have changed the canon for decades. DC Comics routinely "updates" its canon every decade or so. The two biggest DC game changers were Crisis on Infinite Earths and Flashpoint, the latter of which resulted in DC's New52 series which radically rewrote all of DC's continuity. Marvel did somewhat the same thing with the Spiderman One More Day storyline, in which Peter Parker makes a literal deal with the devel to save his Aunt May's life. She gets to live, but his marriage to Mary Jane never happened.

Rewriting the canon is not just the realm of comic books. Sir Arthur Conan Doyle famously killed off Sherlock Holmes because he was tired of the character. However, after fan pressure (including death threats) and the fact that none of his other literary efforts really paid off, Doyle brought Holmes back to life by rewriting the canon, retconning Holmes' death by declaring that the detective had miraculously escaped and merely pretended to be dead.

Could Rowling do the same with Harry Potter? Had the seventh book ended with Harry, Ron, and Hermione at 17, it would be no trouble at all. She could simply declare that after the nasty business with Voldemort was all sorted out, Ron and Hermione went their separate ways, Harry broke up with Ginny, and Harry and Hermione eventually got together. After all, most of those relationships were forged during a time of war, but after the dust settles, people might feel different.

Of course, what stands in her way is book seven's epilogue. We flash forward nineteen years into the future and see that Harry married Ginny, Ron married Hermione, and they all had a lot of kids. Harry, the orphan, finally got the family he wanted, as the Weasleys no doubt accepted him with open arms. Ron, meanwhile, took after his dad in marrying Hermione; his and Hermione's relationship is very similar to the one between Arthur Weasley and his wife, Molly.

I, for one, am a fan of the epilogue. The only thing I would have liked to see done differently was Harry and Dudley reuniting at King's Cross Station platform 9 and three-quarters. I'd have loved to find out that Dudley had a few magical kids of his own, and that his and Harry's children were the best of friends. That would have been a perfect bow for the entire series.

But as an author (warning: self-aggrandizing plug), I can understand looking back at your work years later, as you've gotten older and wiser, and cringing at what your younger self wrote. You think to yourself, "If I had written this now instead of 10 years ago, it would be so different." And you're right, it would be different. Because you aren't the author who wrote those words. Those words are a product of their time, a reflection of who you were back then. They are like your old yearbook photos (and quotes). It felt right at the time, but years later, you cringe.

So I can understand an older Rowling seeing things differently than she did 10 years ago. She might forever regret that choice and never come to terms with it. That's the burden of being an author, there's always one more revision, one more draft, one more edit to get things just right. Even when you finally publish a book, you can still hate it because you came up with an even better idea the day after it hits the shelves.

Rowling is not the first creative person to regret the work of her younger self. The creators of the show South Park reportedly hate the first few seasons of the long-running animated series, despite the fact that many fans consider those episodes to be great. Many artists and musicians also hate some of their most beloved works.

This is often a trap creative people can fall into. We get so caught up into making everything perfect, that we over-think and over-tinker and ruin what could have been great. We lose perspective and are unable to see our work through the audience's eyes. Sometimes those very "imperfections" are, in fact, what people love about our work.

Many artists, unable to reconcile what they think is good versus what their audiences enjoy, quit the game entirely. Others become bitter because it seems that audiences love that one song or book that they, themselves, hate. The more people love that early work over later efforts, the more the author hates it. Some artists or writers, however, learn to live with their early creations, perhaps even embracing the "flaws."

Of course, for an author with Rowling's clout, there is a third option. She could pull a DC and retroactively undo her ending with another book set in the Harry Potter universe. We could find out that the final epilogue never really happened, that it was all an illusion in Harry's mind cause by some new magical McGuffin. Or someone could cast a powerful time spell that changes history, undoing the events between the Battle of Hogwarts and the epilogue. There's plenty that Rowling could to.

I just hope she doesn't do any of that. I respect Rowling as an author, and while I don't agree with her assessment of who should have ended up with whom, I do understand where that comes from. However, I hope that she realizes that if she does revisit the Harry Potter universe, she shouldn't tinker with her own canon. She might come to regret it that more than she does Ron and Hermione.

More of my Musings
Do You Still Call it a DVD?
Sherlock versus Sherlock
Announcing my First Short Story
Quoth the Speaker
How I Got Over Myself and Learned to Love Community
Why We Need Frivolous Bad News
The Smart Choice is Boring
This Guide to Tipping
I Blame George Takei
My cap gun
What do you call a group of leprechauns?
Posted by Charles B. French at 1:38 PM