The Villain is Certain 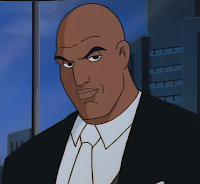 In any story, there is one character who is unwavering, uncompromising, undeterred. This character has no doubts about his course and knows, with utmost conviction, that he is right. This character never needs to naval-gaze, has no use for introspection, and will never second-guess. This person is the villain.

The hero has doubts. The hero questions. The hero wonders if she's making the right choice. The hero wrestles with his conscience. Often, the hero must change and consider other viewpoints and perspectives. The hero must concede the possibility that she is wrong, that she might even be fighting on the wrong side.

In many hero stories, it's not just a clash of good and evil, but also of doubt and certainty. That's why the best heroes, the ones whose stories I find the most interesting, are the ones who wrestle with doubt. They believe that they are doing the right thing, but their biggest fear, something many villains gleefully exploit, is the possibility that they might be on the wrong side. The villains never have this struggle.

A prime example of this doubt/certainty dynamic can be found in Star Trek Into Darkness. (Minor spoilers ahead.) Benedict Cumberbatch plays Khan, a character designed to give Christians great talking points no matter what the incarnation. In this rebooted Trek, Khan remains an extremely certain character who has no doubts at all about right and wrong. The problem is that what he thinks is right is what everyone else considers terrorism and mass murder.


At no point, though, does Khan question his actions (or why he bears no resemblance to Ricardo Montalban.) Khan never once sees himself as the villain. He is the hero of the story, making his actions entirely justified, if not absolutely necessary. Those who oppose him, therefore, are the true villains.

Captain Kirk and Khan agreed on a great many points. Both of them cared deeply for their own crews. Both of them didn't like some of the shady goings-on in Starfleet. For a time during the movie, the two work together for a common goal. However, it wasn't their beliefs that separated them, it was their actions. Kirk constantly questioned whether he was doing the right thing, while Khan never did.


We can find the same certainty in the latest Superman movie, Man of Steel. Superman is full of doubts about who he is and his role on Earth. General Zod, on the other hand, is very certain. Zod has no problem wiping out the entire human race, 7 billion beings, because doing so will help him rebuild Krypton. For Zod, the end clearly justifies the means. Like Khan, he doesn't see himself as the villain, but the savior of his people.


Of course Superman's greatest foe, Lex Luthor, is even more certain about himself. In most modern incarnations, Luthor is a business mogul who sees himself as humanity's greatest savior. In his eyes, Superman is an alien threat to the planet. Luthor is the hero who will not only defeat this alien, but usher humanity into a golden age of peace and prosperity. He is so certain of his righteousness that he is willing to kill millions if it takes down Superman.


Moustache-twirling, scenery chewing villains are definitely fun to watch, but are hardly terrifying. The villains so sure of themselves are the ones who truly scare me. That's probably because we have so many real-life equivalents, people so certain that they have no qualms about committing terrible acts.

Osama Bin Ladin was certain. So was Timothy McVeigh. Many of the people who grab a gun and go on a shooting spree are certain that their actions are justified. None of these people saw themselves as the villains. They were heroes and martyrs, striking a blow for their cause, and they were so certain of themselves that they were willing to kill for it.

This is why absolute certainty makes me very, very nervous. If we look throughout history, our biggest tragedies were brought about by people who were utterly convinced of the rightness of their cause. The Spanish Inquisition. The Holocaust. The Japanese Internment Camps. The massacres and subjugation of Native Americans. The Klu Klux Klan. Those who fought against abolition, women's suffrage, civil rights. In their minds, they were fighting for values, decency, and civilized society.

It's easy to look back at previous generations and pick out who was right and who was wrong. Surely, we say to ourselves, had we lived back then, we would have been on the right side of the issue. (And then another voice answers, "Don't call me Shirly.") What we fail to realize is that we fall into those same traps today.

Christians are especially vulnerable to repeating that history. In fact, it's something Jesus warned us about. When we are so certain that we buy into the idea of our infallibility, we can hypocritically condemn past generations for the same sins we commit today. Our certainty blinds us.

Take the church in Tennessee that recently expelled one of their longtime families. That family's sin - not publicly denouncing a lesbian relative. Instead, the family supported their relative, who fought for and won same-sex benefits from her city. Does this church consider itself the villain? Certainly not. In fact, the church is certain it did the right thing in expelling the family.

For a more extreme example, we merely have to look at the latest antics of Westboro Baptist Church, an organization dedicated to causing pain and suffering wherever it goes. Of course, if you ask the members of Westboro, they will tell you that they are waging a crusade against what they consider to be the evils of homosexuality, that their protests at funerals and other venues are part of their righteous cause. They are full of certainty.

This is when Christians, and to a greater extent religious people in general, become dangerous. When they are so certain of themselves they refuse to tolerate any doubts, any questioning, any dissent, any different points of view. It's one thing to talk people out of doing something bad. It's a lot harder to convince them to stop doing what they believe is good. Because who tries to get people to not do good things? Bad guys. You see the problem.

After all, and I've mentioned this before, the people who had Jesus killed saw themselves as heroes. They were protecting society with his execution. They were serving God by enforcing their code of morality. In their minds, Jesus was the villain, and all who opposed them served the devil. Even the Bible takes a dim view on that much moral certainty.

Bear in mind, I'm not talking about moral values themselves, nor am I speaking against having a firm code of ethics. I'm certainly not against basing a moral framework on the teachings of Christ. I do believe in good and evil, I believe that there is such a thing as absolute moral truth, and I put faith in the Bible. What people believe, what they hold dear isn't the issue. It's their actions in service of those ideals that concern me. That's when there's a problem.

It's one thing to be absolutely convinced that Jesus Christ was the Son of God. It's another thing entirely to believe you are morally justified in killing anyone who doesn't share than belief. Or to kill people who believe in Jesus but not quite the same way that you do. It's actions and practices that I'm calling into question, and every time we want to wage a moral crusade, we first need to ask ourselves whether our actions are truly serving good, or evil.

That's what makes a villain a villain. The villains never questions their actions. Villains never wonder whether mass murder is really the best way to live out their ideals. They never question whether hurting innocent people is wrong. They are certain. Villains can't tell the difference between their ideals and their actions, and that's what causes them to inflict so much pain and suffering.

Heroes and villains often share overlapping beliefs. It's their actions that separate them. If I call out Christians as villains, it is not because of what they believe, it is how they act. It is how they fail to love their neighbor, how they perpetuate injustice, how they cause harm to others, how they refuse to repent and make up for hurting people. Just because they do it in the name of Christ doesn't make it any better.

If we want to avoid falling into the villain trap, we must question our beliefs and of course question our actions in service of those beliefs. We must be willing to listen to doubts, to contrary voices, and avoid the temptation of pure, absolute moral certainty. For when we are at our most certain, that is when we risk doing the most harm.

More Christian Geek Articles
Finding God in Wrath of Khan
Horribly Offended
The Gospel According to Harry Potter
What an atheist taught me about faith
Anti-heroes of the Bible
There's Never a Final Showdown
Star Wars and the True Gospel
Legislated Morality Killed Jesus
Jesus and the Giant Monsters
Posted by Charles B. French at 2:59 PM