Finding God in Wrath of Khan 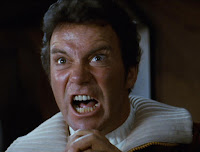 Any self-respecting geek can look at this picture and not only tell you what movie it comes from, but also the specific scene and the exact line of dialogue. If they're really geeky, they'll re-enact the performance.

Today I'm talking about the best of all the Star Trek movies - Star Trek II: The Wrath of Khan. You have the right to disagree, but that's like saying that The Empire Strikes Back isn't the best Star Wars film. Wrath of Khan is the film all other Star Trek films want to be, up to and including the 2009 reboot. It's understandable, given how great it is, as it succeeds in not only being a good Star Trek movie, but in being a good movie.

As a geek, I love this movie. As a Christian, I also love this movie because tucked within gratuitous shots of Ricardo Montalban's galactic pecs are spiritual truths straight out of the Bible. I truly see God speaking through this movie. (But, no, he's not asking for a starship. Everyone knows God doesn't need a starship.) Today I'm going to take a look at the many Biblical lessons found in this movie.

Oh, there's spoilers galore below, so don't stab at me from Hell's heart if I give something away. You were warned.

First, let's look at our villain, Kahn Noonien Singh, a genetically engineered super-soldier. He first appeared in the Original Series episode Space Seed, and wouldn't you know it, he tried to take over the Enterprise. Kirk wouldn't have any of that and marooned him and his followers on the uninhabited planet of Ceti Alpha V. Unfortunately, Khan and his followers didn't have that great a time of it. Thanks to an unforseen disaster, most of them died on that planet, including Khan's wife. He hates Kirk and vows revenge.


Ultimately, his pursuit of revenge destroyed him and his remaining men. Khan managed to escape his exile and steal a starship. He could have used his advanced intellect to create a great society of genetically superior citizens. He could have done many great things with this second chance, but instead he simply tried to kill one man and lost everything. Even one of his men tried to point out this fact:

Joachim: We're all with you, sir. But, consider this. We are free. We have a ship, and the means to go where we will. We have escaped permanent exile on Ceti Alpha V. You have defeated the plans of Admiral Kirk. You do not need to defeat him again. Khan: He tasks me. He tasks me and I shall have him! I'll chase him 'round the moons of Nibia and 'round the Antares Maelstrom and 'round Perdition's flames before I give him up!
source: IMDB

There's a reason Jesus preached forgiveness. It's not necessarily for the other person, but for us. Hatred will destroy us and everything we hold dear.


But why was Khan able to escape his exile in the first place? This goes back to Kirk. Apparently when he marooned these people he didn't tell anyone. The least he could have done is put up a sign warning would-be visitors to Ceti Alpha V that there's a genetically superior madman on the planet. That doesn't happen, resulting in a hapless ship sending an away team to the planet.


Why did Kirk just leave them there? Perhaps Kirk thought it was justice, but deep down it was revenge. It was hatred, because a just solution would be to give Khan and his men a fair trial, allow them due process. Kirk didn't do that. Nor did he check up on them to make sure that the planet hadn't turned into a hellhole, which it had. He sowed the wind and reaped the whirlwind. This is why justice is important, even for our enemies. Treat them well, they can become allies. Treat them like animals, they try to blow up the galaxy coming after us.


Once revenge takes hold, it can and will destroy anything or anyone caught up in it, which is what happened to poor Chekov and Captain Terrell. Khan needed their cooperation, but rather than threaten their lives or hold them at gunpoint, he just put worms in their ears. These Ceti eels make people very susceptible to suggestion, right before driving them insane and killing them.


At the risk of sounding like PSA from the 80's, we have to be careful what substances we allow into ourselves, lest we become susceptible to horrible influences and kill others or ourselves. Human history is filled with examples of tragic stories that include the phrase "alcohol was involved." It can be a regrettable one night stand or you and your buddies forming a mob to go kill that guy you don't like. We can do many things we don't mean to when we let something else drive us for a while.


It's not just literal substances, though. When we allow hatred, bigotry, and/or racism to take root, it can drive us just as insane. Show me someone who spends his entire existence protesting gay funerals, for instance, and I'll show you someone driven insane because he allowed an eel of pride, intolerance and self-righteousness into his brain.

In addition to allowing him to steal a ship, these eel-influenced people gave Khan access to the Genesis Device. (I wonder what the spiritual meaning is here?) This invention would change the universe, by transforming a barren planet into a fully inhabitable environment. It literally builds an entire ecosystem in the span of hours, creating life where there wasn't.


But there's a problem. If there's already life on that planet, it gets wiped out. So this great invention is actually a planet-destroying weapon, capable of eliminating the indigenous population in the blink of an eye. While the creators intend it for noble use, their intentions are quickly perverted by those who see only military application.

This takes us to the very core of human nature. When we see something powerful, we only want to use it to destroy. Humans can corrupt anything and use it to wipe out other populations, and sadly, Christianity is no different. Over time, Christians took Christ's message of love, forgiveness, and mercy and turned it into "Let's enslave or kill everyone in Jesus' name."


But when faced with the ultimate in human greed and petty revenge, we also have the antidote: a selfless act. At the end of the movie, Khan has set the Genesis Device to blow, which will not only kill him but take out the badly damaged Enterprise. There's no way to make repairs in time, and it looks like this is the end for Kirk and his plucky crew.


Spock, however, knows of one solution. He goes into the damaged reactor core, not caring about the lethal dose of radiation he's receiving. His actions fix the problem and allow the Enterprise to escape to safety. When Kirk asks Spock why he'd do such a thing, the answer is pure logic: "the needs of the many outweigh the needs of the few."


Jesus taught something similar. "Greater love has no one than this, that he lay down his life for his friends." While Spock died to save his crew, Jesus died to save humanity from their sins. The greatest good, the power that triumphs over all evil, is self-less love. This is why this film is an undeniable classic. This moment transcends genre to speak to the heart of everyone. Love is more powerful than hate, and even a cold, emotionless Vulcan knows that.


Now, you might point to Star Trek III: The Search for Spock and claim that Spock wasn't really performing as selfless act because he came back at the end of the third movie. The same argument has been made about Jesus, as He too didn't stay dead. However, such an argument misses the point. Self-sacrifice has nothing to do with whether you come out all right in the end, it's what you endure to get there. Neither Spock nor Jesus died a pretty death, and their suffering for the benefit of those they loved is what makes them selfless.


I'm a firm believer that God can speak to us through anything, if we only have ears to hear. There's just as much value in the secular as there is in the sacred, and for geeks, Wrath of Khan is both. We have great moral lessons, a battle of two opposite forces, and the saving power of greater love. The lessons learned in this movie are, and always shall be, your friend.

If you want to see more of my geekiness, check out Guardians of Suncast Dale, a satirical fantasy adventure on Kindle. My Christian Scripts also approach faith from a clearly geeky angle.

More Christian Geek Articles
The Gospel According to Booster Gold
Geeks and Bible Geeks
Origin Stories
Finding God in Goodfellas
Bible Questions and Answers
When 'Veggie Tales' was a Cult Classic
Begun, the Christmas Wars Have
Christians and the Zombie Apocalypse
Posted by Charles B. French at 4:56 PM