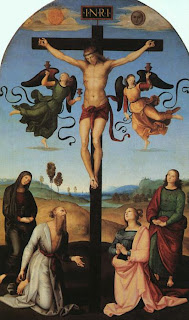 How's that for a headline? It combines two major thoughts occupying Christians this week. The first is the death and resurrection of Jesus, this being the week between Palm Sunday and Easter, when we Christians contemplate Christ's arrival in Jerusalem, His betrayal, arrest, and execution. On Sunday we celebrate Easter, the third day when Christ rose from the grave. That's one thing Christians are thinking about. The other thing is gay marriage.

On Tuesday and Wednesday, the Supreme Court heard two different challenges to laws that deny gay couples the right to marry: Prop 8 and DOMA. As is often the case with big Supreme Court challenges, the masses descended on Washington, some in favor of gay marriage, others who want marriage to stay a strictly man-woman arrangement. It's made for quite the scene.

Both sides have been making their case for years, but that's not what I plan to talk about. Not directly, anyway. No, I want to get down to one of the more basic principles behind the desire to uphold laws against same-sex marriage, that the United States needs to legislate morality and use the force of law to enforce God's laws. That rather than base laws solely on the Constitution, we should base laws on the Bible. We can find many examples of Christians stating that they want the United States governed by Biblical values.

There's one question proponents of the legislated Bible can't seem to address: whose interpretation of the Bible gets enshrined in law? Is it mine? Yours? The Catholics? Protestants? A televangelist with insanely big hair? A guy building a compound equipped with enough firearms and ammunition to take on a small army? Who gets to decide?

Everyone of them you ask, of course, will tell you that their position is the Correct Position, because their interpretation is so clearly what God wants. That other guy who also claims to know what God wants? No, don't listen to him, or to anyone else.All other positions are wrong.

Go back a few centuries and Protestants and Catholics were killing each other over this very question. How do you think Queen Bloody Mary got her name? By enforcing what she believed was God's law. Then we have the Spanish Inquisition, which was less about rational doctrinal debate and more about torture and brutal execution. But they weren't evil, they were just enforcing God's law. (Obviously, in retrospect we know they were wrong. I wonder how future Christians will judge our behavior?)

That's what scares me every time I run into someone who is more than happy to see their interpretation of the Bible legislated. They always claim that legislating the Bible is for the best, that if everyone would just follow God's rules, everything will be better, and society won't have nearly as many problems. After all, what could possibly go wrong when Christians have the power of the government backing their worldview?

Funny how they forget that every time people legislate religion it becomes an oppressive nightmare for everyone else. Now, you might argue that my examples are too old and don't represent the 21st Century. If you want a modern day example, look to the Taliban. They very much believe in legislating morality, in this case Muslim Sharia law. I doubt many Christians point to the Taliban as an example of what we should do in the United States.

If you want to know what true legislated morality looks like in the modern world, it's the Taliban. That's one of the reasons I bristle when I hear Christians talk about wanting to enforce their interpretation of the Bible onto the population as a whole.

Now, it's possible that some Biblical Legislators will simply dismiss the notion that they share any ideas with the Taliban. We're nothing like the Taliban, they say. They're wrong and we're right. Except that's how the Taliban feels about them. When we break it all down, the issue isn't theology, it's fundamentalism and the belief that morality must be legislated. It's the arrogance of assuming that you are different from all the other oppressors, because unlike them, you really are on the side of God.

This takes me back to my incendiary title. This week Christians will contemplate and study the death of Jesus, how He was innocent, a man without sin who died for ours. That is the crux of the story, that Jesus gave His life for ours. But what we often forget are the machinations that led to His execution, which involves Christ's trial, several of them in fact, and what the official charge actually was.

After putting Jesus on trial, the civil authorities found no reason to execute Him. He had committed no crime against the Roman empire, an empire that not only liked killing, was actually pretty good at it. Yet the bloodthirsty Romans still said that the charges were poppycock (or whatever the Roman equivalent of poppycock was) and wanted to let Jesus go.

(Before you go any further, I want to point out that this isn't my way of trying to blame Jews as a race, culture, or religion for the death of Jesus. I don't feel that way at all, and I find the notion entirely silly.)

What isn't silly is the fact that the same faith that began when its savior was killed by legislated morality now is at the forefront of legislating morality. The same faith that holds fast to the teaching that it is through grace we are saved, not works, now wants to make sure everyone follows our rules. It's like we've completely forgotten about what Christ's death means, specifically, what it means for those of us who claim to follow Him.

It means grace. Jesus died so that we would be free of the law, the rules, the guilt, the heavy burden of trying to live a perfect life and failing. It meant being free from sin, reunited with God not because we were worthy, but because God loved us so much He forgave us and wants us back. Jesus rebuked the Pharisees for their legalism and taught that we don't advance His kingdom by legislation, but by forgiveness, grace, mercy.

Now, is morality important? Sure it is, but Jesus had words of caution for those concerned with the world's morality. Before we look to everyone else and condemn, we must first confront our own failings. The big problems facing society aren't everyone else, it's us. We are the issue, and when we become more godly ourselves, when we love others, then things get better. That doesn't happen through legislation or legalism. It happens because of grace.

This raises the question of what we should legislate. After all, aren't laws against rape, murder, theft, arson, to name a few, also legislated morality? Not quite. Those laws are not just about morality, but also about justice. (I've written about this already.) That's the one moral that we should legislate, because the law should be used to prevent people to harm others.

However, we should not be able to use the law to force people who are not Christians, who do not want to be Christians, or who just do Christianity differently, to live the lifestyle we think they should. Instead, we're going to have to accept the fact that somewhere out there, some person is living a life that we don't agree with. We can pray for him. We can try to evangelize him. But in the end, we must let him live his life, as we would want him to let us live ours.