The Gospel According to Harry Potter 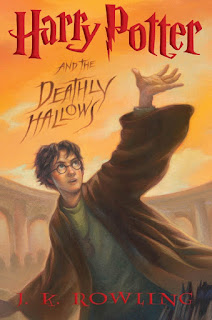 I began reading the Harry Potter books because Christians told me not to. It's a fantastic marketing gimmick, one I fall for time and time again. It's also why I play Dungeons and Dragons, listen to Rock and Roll, and watch Disney movies. However, what started out simply as a "let's see what's got my brothers and sisters in Christ so hot and bothered" turned into a genuine love for the series.

One of the first things I noticed, after the utter charm of the inhabitants of Hogwarts, was the fact that reading it was in no way going to turn me into a wizard. I bought a wand just in case, but I still have to locate my car keys manually rather that flick my wand and shout "accio keys!"

The third thing I noticed was a very strong Christian ethic in this series running right to the core of the story. Like the Lord of the Rings trilogy and the Chronicles of Narnia, this series of books by a British author is bursting with Christian allegory, and that's what I want to talk about.

There's going to be spoilers galore, here, so stop reading if you haven't read any of the books or seen the movies. Otherwise you might find out that Dumbledore was played by two different actors in the movies, and I'd hate to ruin that for you.

Let's begin with the premise of the books, that Harry Potter, as a baby, was the savior of wizards everywhere. Even though the evil wizard Voldemort killed his father and mother, Harry proved immune to the wizard's spells. In fact, when Voldemort tried to kill Harry, the death-spell rebounded and all but destroyed Voldemort instead.


How could this baby stop the most powerful dark wizard of all time? Love. Harry's mother died protecting her son, and in the wizard world, that kind of sacrifice creates the ultimate protection. Love became the most powerful spell against evil. In Christianity, love is what saved us from Hell. Jesus sacrificed himself on the cross to protect us and defeat sin. Jesus even taught that there is no greater love when people lay down their lives for their friends. (A common theme in this series, as you'll see.)


Sacrificial love saved the day, so while Harry Potter was the "Boy Who Lived," his mother, Lily Potter, should truly be credited for saving everyone from Voldemort. The power of her sacrifice came back to stop Voldemort each and every time, and that's straight out of what Jesus taught his followers. Love, not hate, is how we fight evil, whether we love our neighbor or our enemy.


As Harry and his friends grow up in Hogwarts, they always seem to find themselves right in the middle of the action, whether they like it or not. While many of the adults in the school are dismissive of these children, Dumbledore takes them seriously, even going so far as to entrust them with powerful magic and letting them loose to face down the bad guys.


However, to Harry's frustration, Dumbledore seems to keep some vital information from him, and after watching Voldemort come back from being mostly dead, he's a bit angry about being kept in the dark. In the end, Dumbledore must apologize to Harry for not telling him the truth sooner, that Harry is destined to face down Voldemort, and one of them must kill the other. He thought Harry was too young to know the truth, but he realizes that he was wrong to doubt Harry so much, especially after his previous exploits.


Dumbledore realizes the truth in what Paul wrote to Timothy, that he shouldn't look down on these students because of their age, even when having to hand them issues that many adults couldn't handle. Harry, Ron, and Hermione had proven themselves time and again, much like the young Timothy had himself been an example of Christian leadership despite his youth. This is why Dumbledore finally took Harry on and began to train him properly in fighting Voldemort. He was clearly ready and Dumbledore, despite wanting to protect this child, had to understand.


One of the most shocking moments in the series is when Harry's Potions teacher, Severus Snape, seems to kill Dumbledore in cold blood. Clearly Snape was a bad guy all along, as evidenced by all the rotten things he's done to Harry over the years. Dumbledore claimed that Snape had changed, that he was really one of the heroes, but Harry knew the score.


We come to find out in the last book that we had it all wrong. Snape's act wasn't in cold blood, but both an act of mercy and infiltration. Dumbledore was dying, having been cursed by Voldemort. Accepting his fate, he allowed Snape to kill him when the time was right in order to gain favor with Voldemort and become an agent on the inside. Dumbledore's final act was to give what life he had left for the greater good, returning to the theme of sacrificing one's life for the sake of others. It allowed Snape to interfere with Voldemort's plans and pass on information and aid to the resistance.


In the climax of the seventh book, Harry, too, chooses to give his life for his friends. They are all holed up in Hogwarts while Voldemort lays siege to it. However, Voldemort declares that if Harry surrenders himself, the battle will end and everyone else will life. Harry volunteers and allows Voldemort to kill him.


Except that it doesn't work out like that. Again, we have the power of love coming back, Harry showing the greatest of love by laying down his life for his friends. In the end, that act not only prevents Voldemort's spell from killing him, it protects everyone from Voldemort. The evil wizard can't hurt anyone else with his dark magic, and suffice to say he doesn't survive the next chapter.


From the first chapter to the last, the most powerful spell of all was sacrificial love. The greatest magic was one woman's willingness to lay down her life for her son, a young man willing to die for his friends. Quite frankly, if this is the kind of magic that these books teach our children, then that's a lesson worth learning.


It's also worth learning what really led to Voldemort's downfall: pride. The Bible teaches that pride comes before a fall, and all throughout the story the proud wizards, those who would put themselves over others, were the ones who saw their lives and fortunes destroyed. The Malfoy family was incredibly proud, seeing themselves as the most pure of all the wizards, and by the end of the series they had lost everything except each other, perhaps finally learning what truly matters.


Voledmort's pride was the most severe of all. He thought he could not only cheat death, but beat it. He thought he could rule the world and destroy all comers. His pride blinded him to the power of love, something far more than a simple metaphor in the wizarding world. Each time he was defeated, it was because he was so proud of himself that he never saw his end coming in the form of humble self-sacrifice.

As we Christians ponder Jesus' death on Good Friday, we are reminded of ultimate humility and sacrifice, of a man who gave up everything for the sake of His friends. We see someone who believed in children when others would turn them away, who taught about the danger of pride.

I'm not saying that J.K. Rowling intentionally meant to make Harry Potter into Christian allegory. However, I am saying that when it came time for her to find the most powerful magic, the most noble act she could think of, she could find none greater than the example of Christ.


I realize I'm not the first writer to make these connections. If you'd like a more in-depth look at the many, many Christian allegories in the Harry Potter series, you might want to check out The Gospel According to Harry Potter: The Spiritual Journey of the World's Greatest Seeker by Connie Neal.


If you want to see more of my geekiness, check out Guardians of Suncast Dale, a satirical fantasy adventure on Kindle. My Christian Scripts also approach faith from a clearly geeky angle.