What an atheist taught me about faith 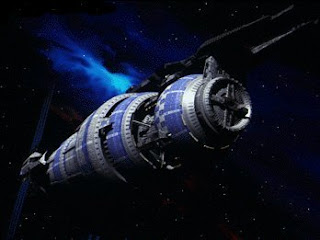 Every geek has their own favorite science-fiction franchise. It could be Star Wars, Star Trek, Battlestar Galactica, or even a franchise that doesn't have "star" in the title. These franchises are more than just escapist fantasy, we connect with them on every major level, watch them over and over, and talk about them nonstop to anyone who will listen, and others who don't want to but we just won't shut up about it. For me, that franchise is Babylon 5.

The show itself is still one of my favorites. It came out when I was in high school and ended when I was in college, and years later watching it takes me right back to that time. I had my whole future ahead of me. I didn't know what I wanted to be, I just wanted to make something of myself and put my mark on the world. Watching that show inspired me, and it still does to this day. True, the show itself is excellent, and I plan to keep watching it for the rest of my life. But the source of my inspiration is not actually the show, it's the writer, J. Michael Straczynski. (Or JMS for short.)


He is one of my heroes, because he did something that many people didn't think possible. He created, wrote, and produced an epic space opera with a storyline spanning five seasons. He had a plan from day one, and he made it happen. It wasn't easy, especially as every season seemed to be that show's last. We fans were always wondering if the show would end before the full story played out. And in many ways, the struggle of the characters on that show mirrored the struggle to keep it on the air, as they faced impossible odds and failure lurked around every corner.

But the show endured. Babylon 5 endured, and from the show, and the show's creator, I learned a simple but profound message. "Faith manages." The show was about faith, faith in ourselves, faith that doing the right thing would work out in the end, faith that even the most impossible odds can be beaten. Every character on that show had faith, and JMS had great faith that he was doing something great. All that faith, and the man was, and is, an atheist.


It seems like a contradiction. How can an atheist have faith? What does an atheist even know about faith? A lot, actually. JMS recognized that faith is not something solely linked to religion. Faith is a belief in something bigger, and greater than ourselves. Faith is believing, trusting that we know what we're doing in the face of so much derision and doubt. Faith is having a vision and devoting your life to seeing its completion, be it a giant boat, a free nation, or a television show that defies conventional wisdom.

While he was an atheist, you'd never know it watching the show. Many of the characters were religious, and religion in general was never dismissed as mere hokum that mankind needed to abandon. No, faith is what brought humans out into the stars, and seeing the wonders of the universe didn't diminish faith, it added to it. When the new Galactic Alliance President was sworn in, he placed his hand atop a book that contained a page from every religion's holy book, as a sign that everyone in the alliance has faith and they all will be respected. Babylon 5 never saw faith as the enemy.

In fact, the entire back-story of the Babylon 5 station was an act of faith. There were four other stations before it. Three were sabotaged before they were finished, and the fourth vanished without a trace soon after becoming operational. To build a fifth one was a huge act of faith, not only that it would actually survive, but also that it would work as intended.


The station was meant as the galaxy's last, best hope for peace. It was meant to be a place where all races could meet and resolve their differences without war. John Sheridan, the captain in charge of the station, and Delenn, the Minbari ambassador, did their best to hold the galaxy together and fight against the approaching darkness. And while at first it seemed like they failed, when the dust settled, it led to a greater peace than anyone could have predicted. When the odds were against them, their faith allowed them to struggle through the darkness and into the light. They had faith that they could overcome great odds.


G'Kar was a man of faith, and by the end of the series his writings and teachings had created a new way of thinking among his people. Forgiving Londo was an act of faith that allowed him to transcend his anger and emerge as something greater. But that would never have happened had G'Kar not taken that step of faith. It's one of many lessons I learned from that show. I have to have faith that grace and mercy will not only make my life better, but that it will make the world better.

When JMS was writing this series, he commented that he struggled with the idea of forgiveness. "So I cannot forgive. Which makes the notion of writing a character who CAN forgive momentarily attractive...because it allows me to explore in great detail something of which I am utterly incapable." While he struggled with the idea of forgiveness, he took a leap of faith that he could write about a concept so alien to him. Sometimes that's the point. Just because we don't get it doesn't mean we shouldn't try. That's faith.

That's just one of many themes of faith on the show. Others could go on and on about all the religious symbolism, the lessons taken from many different plots, not to mention the heavy influence of King Arthur, Lord of the Rings, and Daffy Duck. But while I respect the show for portraying a universe full of faith, I respect even more the kind of faith it took to pull it off in the first place.

As a writer myself, I struggle with faith. Is my book worth reading? Can I actually pull off my grand plans for my own saga? Can I actually make an impact on my readers, assuming I even have them? I can get so easily discouraged, and the struggle can weight me down. But then I remember JMS and the faith he had in this project. I look at my own Christian faith, and I realize that he and I aren't that much different. True, our views on faith will diverge in a few key areas, but not all.

I've been re-watching the series, and the episode that inspired me was the final episode of season 4, "The Deconstruction of Falling Stars." In it, our characters have just returned from saving the galaxy and creating a new Galactic Alliance. However, they are wondering what their legacy will be. We then flash forward to small scenes from the future. We see the the trials and struggles of our characters dismissed by historians. We see humanity fall back into the dark ages and then slowly rebuild a better world. It wasn't a perfect future, but in the end, we see that humanity lives on and fulfills their destiny.

Of course, the coda of that episode carries a second lesson of faith. The final shot of the episode is a simple statement. "DEDICATED TO ALL THE PEOPLE WHO PREDICTED THAT THE BABYLON PROJECT WOULD FAIL IN ITS MISSION. FAITH MANAGES." The episode is a testament to the faith that JMS had in his vision. And, as he said, " a giant middle finger composed of red neon fifty stories tall, that will burn forever in the night."

When JMS started writing and pitching this series, knew it would work, knew it could very well change the nature of television. (And it did.) But there were so many naysayers who dismissed his dream and thought it could never work. I'm sure at times he wanted to give up, but his faith kept him going.

That's where I am as I've been at this blog for about a year, I've written one book, and I'm about to finish the first draft of the second. There are moments when it seems like I'm not doing anything useful, that I'm just wasting my time with all my writing. That all my schemes are just never going to take off.

I will always struggle with faith, with trusting in God that I'm going in the right direction with my life. I often want to just give up even though I know this is what I'm supposed to do. That's why I find comfort from the writer of Hebrews: "Now faith is being sure of what we hope for and certain of what we do not see."

In the end, like Londo, G'Kar, Sherriden, Delenn, and of course JMS, I must have faith in what I'm doing. Faith that I'm on the right path even if I can't see where it leads. Faith that I will emerge from the struggles and that all my effort will be worth it. Faith that even though I can't see how it all ends I'm still doing the right thing.

This is what keeps me going. Faith manages.


Thanks to babylon5.wikia.com and notentirelystable.com for a lot of these images

More Christian Geek Articles
Bible Questions and Answers
When 'Veggie Tales' was a Cult Classic
Begun, the Christmas Wars Have
Christians and the Zombie Apocalypse
Finding God in Wrath of Khan
Horribly Offended
The Gospel According to Harry Potter
How Christians Can be OK with Gay Marriage
Posted by Charles B. French at 7:12 AM