How I Met Your Mother: "The Autumn of Break-Ups" 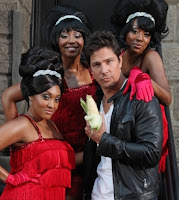 Quick Review: A solid episode that keeps things moving. And there's a cute dog, so everyone wins.

Episode Synopsis: With a rash of relationships on rocky ground, Ted and Victoria find themselves at a romantic crossroads, while Robin thinks Barney's screwy when he decides to employ a dog as his wingman. -tvguide


Spoilers ahead, so you might want to watch the episode before proceeding any further. Of course, that choice is up to you. You might just be a bad boy of sorts who doesn't care about spoilers. That might even be your catch phrase, "I don't care about spoilers because I'm a bad boy." And really, if that's your catchphrase, you need a new one. That isn't going on a t-shirt and will not become an internet meme until everyone gets sick of it. You need a better catchphrase is all I'm saying. Hey, don't shoot the messenger, I'm just telling you what everyone else won't.

Best Reason to get an Understudy: It gets exhausting constantly giving people advice they haven't asked for.

Worst Bad Boy: A chef on a corn-powered scooter.

Worst Catchphrase: "Who wants to eat my meat?"

Best Reason to Invite Another Couple Over: To judge them and feel superior

Worst Sagat Narration: Any time he says "We'll get to that." We've been waiting eight years for you to get to that.

Any hint about The Mother? She must be cool with Ted and Robin being friends.

Any hint about The Wedding? I think we know who Robin's aunt is bringing as her plus-one

Do we like Ted this episode? Yes, because despite his idiocy at the beginning, which was likely a form of denial, he made a tough but necessary call, even though it cost him his relationship with Victoria.

Overall Opinion of the Episode: After being delayed a week because of hurricane Sandy, we finally got to see the promised 'Autumn of break-ups.' There were two break-ups tonight: Barney and the cutest wingman ever, Brover, and the human couple Ted and Victoria.

Let's start with Ted and Victoria. Ted, for most of the episode, was the annoying lovestruck Ted in Denial. He doesn't see what's right in front of his face because he's so into being in a relationship he doesn't get that there are some serious issues. For one thing, he wants to reset the clock when clearly, you can't do that. It gets un-paused, and I like that the show still adds to the relationship lexicon. It's why I love watching it.

However, I like how Ted and Victoria finally ended things. Ted realized that his relationship with his friend Robin was too precious to give up, even to the woman he'd just proposed to. It's a good sign of maturity, and I hope this means that he's going to stay out of relationships until he finally meets The Mother. It's time to see Ted truly grow as a person and be the man he needs to be, not the one who keeps proposing to women he has no business being with.

We got a nice bit of ominous foreshadowing of what would happen when Robin found out why Ted and Victoria broke up. I do like how Ted wants to keep that from her, as he's not doing it to win her back or score points with her. Hopefully this is the beginning of a more mature and noble Ted.

I'd like to see Ted actually get back to his other passions, teaching and being an architect. I liked "Professor Mosby" and aside from an ill-fated field trip last year, we really haven't seen much of him. That Ted would be a welcome return, and it would keep us from having to put up with Ted in breakup mode.

Speaking of breakup mode, Barney dealt with his loneliness in the cutest way possible: a four-legged furry wingman named Brover. It was a well-executed concept, particularly with Brover being the literal dog version of Barney. It worked on so many levels, especially on how Barney wound up being Brover's wingman on occasion. This is the kind of tomfoolery that I come for.

I like knowing more about Nick, and his career as a cable-access chef makes a lot of sense. I still want to know the story of how he and Robin got together, but it seems we're just going to see them grow farther and farther apart. I have to give Michael Trucco a lot of credit; he's more than willing to look the fool for a laugh, and I loved his "bad boy" promo and all his lame catchphrases. It's too bad he'll be gone soon, but it is the autumn of break-ups.

Marshall and Lily were relegated to sassy support status this week, and with Mickey being their nanny, it's given them time to get back to their hobbies, which in Lily's case is meddling. Her taking on Marshall as an understudy was not only amusing, now I wonder what took her so long. I guess now that she's got a child to worry about, she needs an extra set of hands to properly proffer unsolicited advice.

Overall this was a good episode. I like how we're making progress in the story and not spending so much time lingering in relationships we know will end. Now we just have one more break-up to go, and then we get to see how Barney and Robin get together.

Now if you'll excuse me, I have to buy a dog a tie.

Read more of my 'How I Met Your Mother' reviews here
Posted by Charles B. French at 8:03 PM

Email ThisBlogThis!Share to TwitterShare to FacebookShare to Pinterest
Labels: Episode Review, How I Met Your Mother, The Autumn of Break-Ups