Begun, the Christmas Wars Have 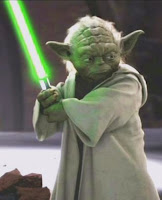 I've discovered two other inevitabilities besides death and taxes. Mention Star Wars, and someone will talk about how George Lucas ruined the series with the prequels. Mention Christmas to politicians and they'll go on about this "War on Christmas."

Given that is it Christmastime, the War on Christmas rhetoric is going strong, doubly so because people are running for President. Believe it or not, this reminds me of the one thing Lucas got right in the prequels.

While the answer to how Anakin became Darth Vader was mostly annoying, I was far more intrigued by how a once free Republic became the evil Galactic Empire. If you've never seen the prequels, I'll sum them up so none of you have to put up with a certain Gungan who will remain nameless. A massive droid army began blowing everything up, and only with the help of an army of clones was the Republic able to stop it, thus starting the Clone Wars. In order to maintain stability throughout the crisis, Chancellor Palpatine was elevated to the position of Emperor.

Here's the dirty secret: Palpatine was behind the droid army attacks. He manufactured a threat to get people riled up, line up behind him, and give him power. The threat was false, and he used it to manipulate a pliant Republic. In other words, they voted for and cheered on their own demise.


This is how I feel when I hear politicians and pundits go on and on about this War on Christmas. What they don't tell you is that if there is a war, THEY started it. They're the ones who benefit by generating ratings, getting votes, and selling books to people who didn't know that they were supposed to be outraged. It's a good way to distract people from real issues and get them obsessing over nothing.

Let's look at this 'Happy Holidays' controversy. Happy Holidays isn't a recent phrase. People have been using it for a long, long time. It was never a big deal, because it was a lot easier than trying to mention every single December holiday in a simple greeting. It was never meant as an attack on Christmas, just a way to make life easier. Some Christians even use the phrase to refer to the many Christian holidays during this time, from St. Nicholas Day on December 6th to Epiphany on January 6th.

Suddenly, though, Christians were told that people not wishing us "Merry Christmas" was an affront. Rather than simply accept the holiday cheer in the spirit it was given, we were to treat such a greeting like George Lucas treats the Star Wars Holiday Special. We were to boycott stores who dared to utter those hateful words, and even though Presidents have been using the phrase for decades on their annual Holiday Cards, we were to suddenly have a problem with it now.


Not only were we told to have a problem, when there had been none before, but we were to respond to any greeting of 'Happy Holidays' with 'No, it's Merry Christmas!' And we were to do it with all the grace of a New York Cabbie critiquing someone's driving skills. We were expected to have a Death Star size chip on our shoulder and open fire on any offender who dared cross us.


A bigger affront, we were told, was the fact that courthouses all across the nation weren't letting us set up Nativity displays. (I've addressed this before.) As far as the pundits were concerned, this was one step away from being thrown to lions and represented the government's overt persecution of Christians. We were encouraged to be offended, to fight to the last, and stoke the anger until it burns.

Can't you see? This is the seduction of the Dark Side. Pride. Anger. Hate. This is what leads us down a dark path, and the fruit is our own destruction. We got so obsessed with fighting some kind of enemy that we destroy everything we hold dear. It's how the Emperor seduced Anakin Skywalker, it's how the Republic became the Empire, and it's what far too many Christians are falling for today.


When we pitch a fit about this so-called "War on Christmas," we're making the holiday about us. We're removing the focus from Jesus to ourselves and our petty wants. We're rejecting "Peace on earth, goodwill toward men," and replacing it with "My way or the highway." If anyone is attacking the true meaning of Christmas, removing Christ from the holiday, it's us. We're waging war on Christmas.


What are the fruits of the spirit? Love, joy, peace, patience, kindness, goodness, faithfulness, gentleness, and self-control. This fruit should be abundant at Christmas, overflowing in Christians. Instead, when we obsess on this "War," the fruit is pride, bitterness, division, dissension, disrespect, and sometimes outright hatred. If this is you, you're completely missing the point of Christmas.

Let's get something straight right now. There is no concerted war against Christmas. You and I are free to celebrate Christmas. We can decorate trees, hang stockings, light Advent candles, attend as many church services as we want, open presents, write to Santa, put our children in bathrobes and have them be shepherds, put lights on our houses, listen to John Denver and the Muppets 'A Christmas Together,' go caroling, attend a Christmas Eve service and drip wax on your pants when you light candles, watch Die Hard, and wish each other Merry Christmas. We are free to do all those things, and no one's going to arrest us for it.

If a few people ask us not to be completely obnoxious about it, that perhaps we respect the fact that not all Americans celebrate Christmas, that's not persecution. That's being a considerate neighbor.

Besides, all those Christmas trappings aren't the core of Christmas. To quote the bumper sticker, Jesus is the reason for the season, and perhaps a way of celebrating the season is to actually act like Jesus. What does it mean to celebrate the birth of Jesus Christ, who was God made Flesh, who grew up to die on a cross for all our sins? How are we Christians supposed to celebrate?

Let me ask you this. What did Jesus do? He ministered to those in need, he helped the helpless, he fed the hungry, he fought injustice and gave of Himself freely. That's how we are to celebrate Christmas, by living out the message of Christ. We are to love our neighbors, love our enemies, and treat others the way we'd like to be treated.

So let's get over ourselves. The only ones preventing us from truly celebrating Christmas, from truly spreading the reason for the season, is us. Let's stop listening to this "War on Christmas" nonsense and instead rediscover what it truly means to put the Christ back in Christmas. This holiday isn't about us, it's about everyone else, a world full of people God loved enough to die for. Lay down your petty pride. Instead, show people that Christmas isn't about pointless fights over nativity displays or holiday greetings, it's about love and peace.

If there is a War, let it be against the darkness, against hopelessness and despair, against loneliness, poverty, and injustice. Let's fight the true evils of society and be beacons of light, shining cities on a hill. We don't need a nativity scene on a courthouse lawn for that.

Merry Christmas, Happy Holidays, and May the Force be With You.

If you want to see more of my geekiness, check out Guardians of Suncast Dale, a satirical fantasy adventure on Kindle. My Christian Scripts also approach faith from a clearly geeky angle.

This Christian Geek
Geeky Divisions in the Church
The Gospel According to Booster Gold
Geeks and Bible Geeks
Origin Stories
Finding God in Goodfellas
Bible Questions and Answers
When 'Veggie Tales' was a Cult Classic
Posted by Charles B. French at 7:29 PM