When 'Veggie Tales' was a Cult Classic 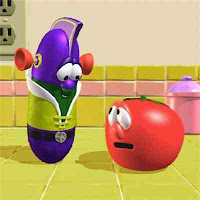 Back in the late 1990's, you could use a predictive theorem at any gathering of college-aged Christians. If the crowd numbered greater than 500, and if there were giant video screens in the vicinity, the probability of seeing a Veggie Tales video approached 100%. And as soon as Larry the Cucumber popped up in a towel and lamented his lost hairbrush, the crowd would go wild and immediately song along.

It was an undeniable truth. College-aged Christians in the late 90's loved Veggie Tales. Maybe not all of us, but plenty of us loved those videos enough to pay $15 for a 30 minute VHS. At fifty cents a minute, you'd hope it was worth it, and yes, Veggie Tales back then were more than worth it. In fact, to have a Veggie Tales video in your collection made it elite, for it was evidence of a long and harrowing journey.

What are Veggie Tales? Created by Phil Vischer and Mike Nawrocki, who voice most of the characters, they are animated stories about anthropomorphised vegetables as they go on adventures and learn important Bible lessons. They retell Bible stories or spoof popular movies such as the Wizard of Oz, Indiana Jones, or Lord of the Rings. While they seem like something only kids could enjoy, they are incredibly funny with many clever jokes and pop-culture references that only adults will truly appreciate.


They weren't on television, you couldn't rent them, so either you borrowed them from a friend or bought your own. This was back before Amazon was more than a place you were afraid God would send you if you became a missionary. You couldn't get them at Wal-Mart or any normal store. No, to get your Veggie Tale fix, you had to buy it from a Christian bookstore. And you hoped that the one close to where you lived had it, because otherwise it would be at least an hour-long drive to get to the next one. Even if they carried Veggie Tales, there was no guarantee that they had the one you were looking for.

But once you got it and brought it home, it was a prize, proof that you had what it took to find a copy of an obscure children's show starring computer-animated produce. And why, you ask, did this matter so much to us? To me? Did we love it ironically? No, our love was genuine because Veggie Tales were funny, clever, witty, and just a little bit subversive. It was unlike any other Christian programming we'd ever seen, and they were so well done that it didn't matter if children were the target audience, we marveled at a "Christian" video that was actually good. (And if you think I'm making a backhanded insult about most Christian media, I am.)

It is in the nature of college students to love cult classics, from the Evil Dead movies, Rocky Horror Picture Show, and of course, Monty Python. Veggie Tales quickly became part of the cult canon, and you'd never go wrong with a Dancing Cucumber reference when someone spoke Spanish, or asking if someone's Aunt Ruth had a beard. A misplaced hairbrush was just an excuse to break into song. Soon, event organizers knew that nothing would elicit the cheers like playing one of the Silly Songs with Larry in between the latest videos from D.C. Talk and Audio Adrenaline.

Of course, Veggie Tales did not remain in obscurity, and like your favorite band that only you've heard of, it just wasn't the same when they went mainstream and started to play it safe. I still like Veggie Tales, but I haven't watched it in a long while. While the new material is good, the early stuff, from back in the 90's, that was the best. And I'd like to go through some of what made those Veggie Tales the great cult classic.


The first episode I watched was Dave and the Giant Pickle, a retelling of the Bible story of a boy who bludgeons a large man to death with a rock and then beheads him. Naturally, Vischer and Nawrocki made a few story revisions. They also added in their own brand of screwball comedy, including what might be the first ever Monty Python reference in a Christian children's cartoon. The Philistines, portrayed by French peas, taunted the Israelites in the same way that the French knights taunted King Arthur in Monty Python and the Quest for the Holy Grail.


Dave and the Giant Pickle also included screwball antics involving tipping sheep, pizza with cheese in the crust, and a fantastic reference to Jurassic Park. It was a smart video that actually succeeded in offering a Christian message without being complete drivel.


While I preferred Dave, many of my friends liked the much edgier video Rack, Shack, and Benny, which was the story of Shadrach, Meshach, and Abednego. It's another Bible story that's pretty dark. In the Bible story, the three were kidnapped, enslaved in Babylon, and thrown in a fiery furnace for not bowing to a gold idol. In the Veggie Tales version, "Rack," "Shack," and "Benny" are part of a group of children who work at a factory for an unexplained reason, and they are thrown into a furnace for not worshiping a giant Bunny.


What made this video extra special was the Bunny Song. It contained lyrics such as "I don't love my Mom or my Dad, just the Bunny." And while it was supposed to be the bad song the good guys refused to sing, it proved to be so incredibly catchy parents complained that their children were singing a song about not going to church or school. You know you have a great kids video when you get in trouble with parents.


Why do you think we loved these videos? They were both clever and subversive, something practically unheard of in Christian media, the most earnest of genres. There were other episodes, but these two were the most popular in college video collections.

The best part about Veggie Tales, though, were the Silly Songs with Larry.

The Silly Songs were just that, songs about something incredibly silly. They were also lyrically clever, incredibly catchy, and absolutely hilarious. They were no doubt inspired by some of the sillier Monty Python songs over the years, and even if you didn't like the Veggie Tales, you had to love these songs.

"Love my Lips" not only taught you the Polish word for lip, but included a reference to Sonny Bono and the mole.


Dance of the Cucumber is funny for Spanish speakers. Watch Bob grow ever more angry as he translates insults directed at him.


Of course, the Hairbrush song is a classic and usually the most requested video. It was amazing to watch an entire stadium full of teens and twenty-somethings sing along with Larry.


Since we're in the Christmas season, I'd be remiss if I didn't include the song "Oh Santa." Guard your quilts!


Of course, Larry wasn't the only one who got a song, as we see in the epic rock ballad "His Cheeseburger." Meat Loaf has nothing on Mr. Lunt.

Veggie Tales proved that you could be a Christian and a geek with pop culture sensibilities. It was unlike anything else because it was actually, genuinely good. It wasn't condescending or grating, and the quality of the material allowed it to become a mainstream success. Of course, success comes with a price.

Later episodes of Veggie Tales lost that edge. They could get away with a lot of stuff when no one was looking, but with mainstream Christian attention, they felt they needed to tone it down. They didn't want a lot of parent complaints because they, not college students, bought the majority of the videos.While they are still clever and worthy of your time and attention, they aren't the prized collectors items for college Christians like they once were.

Tragically, the edge removal was also retroactive. The Bunny Song received an overhaul and became a more positive song. Future releases of "Love my Lips" did not contain an image of Sonny Bono.

I'll always cherish those early Veggie Tales videos, and Dave and the Giant Pickle still graces my shelf. Their wit and subversive humor inspired me a time or two, and for that I will always be grateful.

I get why Veggie Tales had to change, and I don't begrudge them trying to appeal to the widest audiences. They are doing good work, and I wish them well, because no matter what, they remain constant to one truth that will never go out of style:

God made you special, and He loves you very much.

If you want to see more of my geekiness, check out Guardians of Suncast Dale, a satirical fantasy adventure on Nook and Kindle. My Christian Scripts also approach faith from a clearly geeky (and often subversive) angle.The Bunny Song's got nothing on me.

This Christian Geek
Geeky Divisions in the Church
The Gospel According to Booster Gold
Geeks and Bible Geeks
Origin Stories
Finding God in Goodfellas
Bible Questions and Answers
Begun, the Christmas Wars Have
Posted by Charles B. French at 8:01 AM