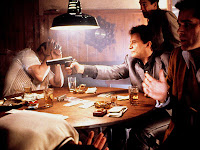 Christians aren't supposed to like movies like Goodfellas. We're especially not supposed to buy the movie on DVD because we can't stand the TV version and want all the cursing intact. As you can probably tell, I disagree with both of those notions. Goodfellas is one of my favorite movies, and not because I only watch movies about crooks with filthy mouths. For me, it's the story that matters most, which is why Goodfellas is right next to my giant Pixar collection. (The scene where Woody asks Buzz "How am I funny?" is classic.)

Goodfellas is an amazing story for several reasons. The first is that it is a true story, based on the book Wiseguy. In a rarity for Hollywood, the movie stays pretty faithful to the real-life events, because when you read about what the real-life Henry Hill was up to, you'll see why they didn't need to embellish. The other reason the movie is amazing is that it's a perfect morality tale.

As a Christian Geek, I believe that God is everywhere, and I furthermore believe that God can speak though any movie, not just those featuring talking vegetables. In my own egotistical, yet humble, opinion, I believe God is speaking through us through Goodfellas, which is why this movie is worth watching.


Ray Liotta play Henry Hill, a man with more power and influence at the age of 22 than most people have in their entire lives. Ever since he was a kid, he wanted to be a gangster, because that meant he could do what he wanted, when he wanted, and answer to no one. This is why evil is so seductive. It doesn't turn you into a mustache twirling Bond villain, because you don't see yourself as the "bad guy." Henry Hill never saw himself as evil, just the smartest guy in the room taking advantage of suckers. His sin was pride, and you better believe there's a fall coming.


That's what God wants us to see in this movie, the true nature of evil. If we Christians are called to be forces of salt and light in the world, we need to know what we're up against and be able to see from the other side's perspective. Often, we're the only ones who see good and evil. The other side doesn't see itself as an evil oppressor, a source of injustice, scourge of the innocent. If we are called to put a stop to things like sex-trafficking, and I absolutely believe that we are, then it helps to know how the traffickers see themselves.

It also helps to realize that Christ calls us to not only love those who are oppressed, but those doing the oppressing. In other words, we are called to love, minister to, and forgive those same sex-traffickers, which can be a bitter pill to swallow until you realize that they are also victims. When you are seduced by evil, it's fun at first, but eventually that life will destroy you, as it did Henry Hill and his associates.

The best example is the Lufthansa heist, a real event that was the biggest robbery in history, netting upwards of six-million dollars.The problem was that Jimmy (Robert DeNiro) got really paranoid due to the pressure of law enforcement and began killing off everyone involved. Everyone thought they were getting a massive payday, and instead they turned up in landfills and meat trucks.


In the end, everyone was a victim, including the criminals. Jesus died for everyone on the cross, including the bad guys. He wants to save them all, and the Great Commission means that it is our job to reach out to people in every walk of life, no matter who they are. Including people like Tommy.

Ah, Tommy. His sin was pride, wrath, and pretty much anything else you can think of. He was crazy and had an ego that old him he could get away with murder. His pride went before a pretty major fall, particularly when he didn't check his ego after getting insulted by Billy Batts. Tommy's pride couldn't let it stand, and so it was bye-bye Billy.

But pride has a way of catching up to us, and Tommy's antics got the best of him. Both in the movie and real life, because Tommy was a real person, the organization got tired of Tommy and took care of him. He crossed the line killing Billy, because you don't kill a made man. In a gruesome twist, they lured Tommy into a trap by making him think he was getting made. Then they made him into a corpse.


This brings up another lesson. We fool ourselves if we think the other side doesn't believe in right and wrong. Henry Hill's associates had a clear moral code. Tommy violated the code and got killed for it. Henry, being brought up in the life, made sure to never violate the morals of his new family. But the good news for Henry was that the morals also protected him.

When his new bride was worried about someone stealing their wedding gifts, especially the bag full of money envelopes, Henry just laughed. No one would steal from them, because according to their code, they don't steal from each other. That would be wrong. They had other rules, including always pay respect and tribute to the top of the chain and never rat out the organization.

As you can see, we can't assume that people without Christ have no moral code. Sometimes their moral codes, and adherence to them, are better than ours. If we want to engage the world, reach out to our neighbors, we can't begin the conversation assuming that the concept of basic morality is foreign to them. It's both a condescending insult and just plain ignorant.

But in the end, the major lesson in all of this is that wealth and power is seductive, no matter where it comes from. This is why Paul warned us that the love of money is the root of all evil, and that believers who pursue wealth get twisted. We can start to believe that we deserve all this money, and that our wealth means that God loves us and is on our side. We then abandon our call to be salt and light and pursue greater wealth instead, getting us further entrenched in something that will destroy us. (And if you think this sounds like the Prosperity Gospel, you aren't wrong.) But Christians who want to define their faiths by their bankroll better be careful, because their pursuit of wealth could destroy them and everyone around them.

The reason we even know about all these events is because Henry got busted for drugs in the 1980's. His fall not only robbed him of his power and influence, but it took down the entire organization. Henry turned on them to avoid a lengthy prison sentence and entered witness protection, sending his associates to prison themselves. It was a pretty steep fall for Henry, and it could be just as steep for us.

As you can see, Goodfellas is a powerful story and a great movie. From it, we know what we're up against, who we're really called to love, and why we should avoid making money and power our sole priority. This is a lot packed into a little movie that came out two decades ago, but the message still stands and the movie itself holds up. God is speaking loud and clear through this movie, and we better listen.

Even if the message has a lot of dirty words.

If you want to see more of my geekiness, check out Guardians of Suncast Dale, a satirical fantasy adventure on Nook and Kindle. My Christian Scripts also approach faith from a clearly geeky angle. (Both acute and obtuse.)

This Christian Geek
Geeky Divisions in the Church
The Gospel According to Booster Gold
Geeks and Bible Geeks
Origin Stories
Bible Questions and Answers
When 'Veggie Tales' was a Cult Classic
Begun, the Christmas Wars Have
Posted by Charles B. French at 6:58 AM