This Review of: The Woman in Black 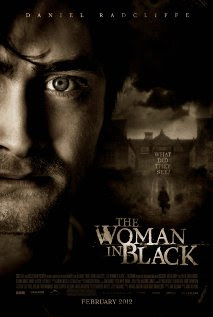 Quick Review: Though a by-the-numbers affair, it's moody setting, strong lead, and good scares make it worth seeing if you're looking for something spooky.

Full Review: It's hard to predict whether someone will find a movie scary. One movie may be scary to you, while the person you're watching it with finds it boring and not at all frightening. Horror, like comedy, is subjective, and it's often better to stick with a particular style than try to appeal to a broad audience.

The Woman in Black succeeds because it knows what kind of horror movie it wants to be, a gothic horror light on gore, heavy on suspense and atmosphere. This might not be everyone's cup of tea, some of you might not even like tea, but it's good tea, and that's where I'll end the metaphor. It's based on the novel by Susan Hill, which had previously been adapted into stage play and TV-movie.

In this version, Daniel Radcliffe plays Arthur Kipps, a man still grieving for his late wife. He's a lawyer tasked with going to a remote village and settling the affairs of a recently deceased widow. Upon arriving in town, he discovers that the children keep dying and somehow it's connected to a mysterious woman in black he keeps seeing. The plot doesn't take too many wild twists and turns, and if the worst criticism of the film is that it doesn't deviate that much from the convention, that's hardly a knock against it.

After all, it's not so much the story, but how it's told that matters. Radcliffe proves that he doesn't need magical powers to be a leading man, and from the very first moment we understand and feel his torment of being a widower raising a son alone. (Trivia note #1 - his son is played by Radcliffe's real-life godson.) This isn't stunt-casting by a cynical studio eager to take advantage of Harry Potter fans. Radcliffe proves he's a fantastic performer, as fans of Broadway have already figured out. If he keeps choosing solid roles like this, he'll have a great career ahead of him.

He's not the only one who does well. All the performances are strong: the townspeople especially, as they convey a sense of deep sorrow barely kept in check in front of this outsider. And when you want to do horror right, you get some creepy kids, and this movie's got them in spades.

The setting is what makes this an effectively creepy movie. The town is never anything but grey and damp, and the old house is beautifully unsettling. One of the most striking shots is the long drive from the town to the manor house, as it gives you a real sense of isolation without having to say a word.

The real question, asked of every horror movie, is whether or not it's actually scary. If you're looking for scares, you'll get them. This movie knows how to build up suspense, and half the time it's the anticipation of what's coming next rather that gets to you. One criticism of this film is that it relies too much on startling the audience, and while there are plenty of times when things jump out, you'll also have more subtle moments that are even more unnerving. This movie might be faulted for sticking too close to classic devices, but the reason they are classic is because they work.

This is a well-done film that succeeds as a scary movie. If you're a fan of the genre, you owe it to yourself to see it. I predict this movie will make it into the rotation of many Halloween horror movie marathons, and it definitely deserves to be. Unlike many brainless hack-and-slash horror movies, this one is legitimately scary.

One more bit of trivia. Adrian Rawlins played the lead in the TV-movie (there named Arthur Kidd). Rawlins was later cast as James Potter (Harry's dad) in the Harry Potter films. Like father, like son.
Posted by Charles B. French at 12:47 PM