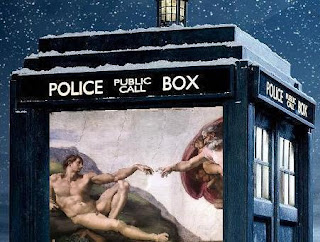 So what does it mean to be a Christian and a geek?﻿ Are the two worldviews even compatible? Can you believe in God, believe that Jesus was the Son of God, came to Earth, died for our sins, rose from the dead, and that whoever believes in Him will not perish but have eternal life and also be a fan of graphic novels, Babylon 5, 'Weird Al' Yankovic, Doctor Who, video games, Magic the Gathering, The Big Bang Theory and many, many other geeky pursuits?

Yes. Yes you can. Any other questions?

It's tough because at first glance those two worlds seem incompatible. The geek subculture defines humanity in the context of real and theoretical science, fantasy creatures and magic, while Christianity defines humanity in the context of faith in a Creator God and His love for us. But faith stereotypically opposes science; the two sides seem constantly at war like the Cylons and humans, Terminators and humans, Borg and humans. (You know, the human race really doesn't get along with anyone, now does it?)

However, to see faith as anti-science misses the point just as seeing geekdom as anti-faith misses it just as widely. The two schools of thought do share a wealth of common curriculum, and its not surprising to find Christians who will jump into any debate about the final episodes of Lost and Battlestar Galactica. There are Believers who go to church on Sundays and then have marathon D&D sessions that Friday night. The Faithful are not out of place camping out for good spots in a Comicon panel.

Christianity and geekdom are not mutually exclusive. In fact, it is quite easy to find many elements of Christian theology in geek culture. The fight between good and evil, the belief in justice, sacrifice, and fighting to protect the weak are themes in the Bible, Harry Potter, Buffy the Vampire Slayer, and every Superman comic ever printed. The list of characters in science fiction and fantasy who have died to save others is long indeed.

What else do Christians and geeks have in common? For one, both groups are easily stereotyped. Christians have a reputation of anti-science, homophobia, and right wing politics. Geeks are seen as anti-social basement dwellers who will never date.While that is true for some, there are also Christians who believe in evolution and fight FOR gay rights and geeks who wed in Star Wars-themed celebrations (with epic LARP sessions for bachelorette parties).

Both groups also have their sacred texts that are the foundation of their lifestyle. For Christians, it's the Bible. For geeks, it's the Lord of the Rings. (Written by J.R.R. Tolkien, a Christian.)

Christians are prone to splinter over minor and sometimes silly theological differences. Geeks break into Star Wars versus Star Trek factions at the drop of a tricorder.

Christians may dress up to go to church, attending services presided over by clergy in silly outfits. Geeks attend conventions dressed as pretty much any fantastical character they can think of.

As you can see, there's a lot of overlap in lifestyle and thought, and I plan to explore these commonalities in future columns. As a Christian and geek myself, I find that my faith is strengthened by my geekiness. Hopefully, these columns will help those of you in the center of this Venn diagram to not feel like you have to choose one or the other, and for those on either side, perhaps offer a greater understanding of people who aren't that much different from you.

And then we'll talk about Firefly.


A big thank you to my wife for her help on this column.

If you want to see more of my geekiness, check out Guardians of Suncast Dale, a satirical fantasy adventure on Nook and Kindle. My Christian Scripts also approach faith from a clearly geeky angle. (Both acute and obtuse.)

Geeky Divisions in the Church
Geeks and Bible Geeks
Origin Stories
Finding God in Goodfellas
Bible Questions and Answers
When 'Veggie Tales' was a Cult Classic
Begun, the Christmas Wars Have
Posted by Charles B. French at 8:11 AM