How I Met Your Mother: "Something Old" 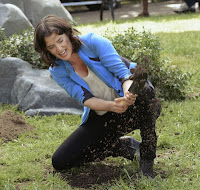 Quick Review: We are treated to three plots that don't reach their full potential  and instead repeat past glories.

Episode Synopsis: Years ago in Central Park, Robin buried a "something old" for her wedding, but now she can't locate it. Meanwhile, Marshall and Lily ask Ted to help them pack for Italy; and Barney spends some bonding time with Robin Sr. -tvguide

Spoilers ahead, so you might want to stop what you are doing before you go any further. Otherwise, when you are busy reading the spoilers, someone is going to come from behind you and steal your batteries. Do you want that to happen? Do you? Because when that happens, and it will, you will wonder how someone was able to remove the batteries so deftly. You won't even know where these batteries are from, but there they are, in the hands of your adversary. It's not a pretty picture. Especially since you'll spend the rest of the day wondering which of your possessions no longer has batteries. That can drive you mad.


Full Review: There's one episode left, and this week we have three small stories that almost add up to something big. Unfortunately, we've got Robin trying to dig up her "something old" for her wedding, Lily and Marshall trying to decide what stays and goes for their Italy trip, and Barney bonding with Robin's dad over laser tag. Each story could have been a pretty good episode on their own, but crammed together like this, they aren't fully realized.

I like the idea of Barney and Robin Sr. bonding over laser tag, having a falling out, and coming together at the end. Unfortunately, instead of exploring the dynamic between the two of them, and the son-in-law/father-in-law rivalry, the show covered ground that's been explored pretty thoroughly already with eight years of laser tag. The two of them leading opposing armies was cute, as was their command styles, but in the end the plot felt weak and rehashed.

A better plot was Lily and Marshall trying to decide between what to keep and throw out. This was the strongest story because it gave us a little glimpse into the past, which is what happens whenever you start packing and deciding what to keep. There were so many stories that could have been told about these objects, particularly how Lily got all those purses. Again, we already saw that several times in the series, most notably the classic episode "Intervention." I did like Ted as the final arbiter of packing, and his entrance was classic Ted.

I did appreciate Ted's reluctance to get rid of the bean-bag chair. He's still struggling with everyone else moving on but him, and it becomes a symbol of his own relationship with his friends. If they can get rid of this historical artifact, why couldn't they get rid of Ted. I did like how he finally told Lily and Marshall to toss their old friend, letting go of the past and his insecurities. It would have been better had "letting go" been more of a universal episode theme.

We did see some thematic crossover between Ted and Robin's plots, as Robin's attempt to dig up her "something old" leads to her needing to let go of her fears and insecurities about being married, particularly being married to Barney.

I am a bit worried about the final moment of the episode, the long, lingering hand-holding in the rain. I really, really hope this doesn't mean Ted is still hung up on Robin. We've seen this dance for eight years, and it's gotten old, much like many of the other plot elements in the episode. I would much rather see Ted fully over Robin before meeting The Mother, rather than only getting over his ex when he meets his future wife.  It would be a fitting theme for "letting go," as Ted finally meets the woman of his dreams when he finally lets go of his unhealthy attachment to Robin.

However, I did like the conversation between Ted and Robin as they reverse roles about whether the Universe is giving them signs or not. It shows Ted is starting to grow up about relationships, and it's a reflection of Robin's anxiety, and part of why she is so nervous about marrying Barney, as seen a little ways down the road. But like the other two plots, I felt the show could have either linked Robin more closely to the other stories thematically or just focused more on her story.

I had no problem with a younger version of herself wanting to be married. We know Robin has gone through many changes over the years, and giving up her desire to marry may have also accompanied giving up her tomboyish ways. For me, it wasn't a character inconsistency.

The one aspect that did help bridge the stories was when Robin called Barney asking for help. Ted knew what Robin really meant by "Nah, it's stupid" while Barney didn't. We see Robin realize that Barney is a lot like her father, and that she's not exactly a fan of that similarity. I would have loved to see more exploration of that, with more flashbacks to Robin growing up juxtaposed with Robin and Barney today.

One other frustration I have with this episode is what it means for next week's finale. (Appropriately titled "Something New.") Since the show is renewed one more year, I know that we're still going to be strung along, despite the fact that this is the time in the show's mythology that Ted meets The Mother. I fear that the end of the season will reveal little more of the story of The Wedding, and if we see Ted meet The Mother, it will only be a fleeting glimpse that the show will explore next season.

There's just too much to cover in a half hour for the entire story to be told. We might not even get to the story, but I'll criticize that bridge when we get to it.

Worst Episode Moment: Most of the laser tag scenes.

Any hint about The Mother? She probably appreciates good packing skill

Any hint about The Wedding? Robin might forgo her something old, if not the ceremony altogether.

Do we like Ted this episode? Assuming he's not making a last, desperate play for Robin, he was all right. I get his desire to hang onto the beanbag, and he proved himself a good friend. He's not at his best, but he's better than he has been.

Read more of my 'How I Met Your Mother' reviews here
Posted by Charles B. French at 7:20 PM

Email ThisBlogThis!Share to TwitterShare to FacebookShare to Pinterest
Labels: Episode Review, How I Met Your Mother, Something Old