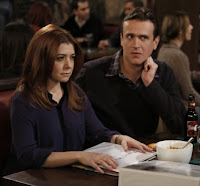 Quick Review: For better or worse, it all ends in four months.

Episode Synopsis: Despite having already popped the question, Robin insists that Barney seek her father's permission before the couple can announce their engagement. Meanwhile, a conflicted Ted throws himself into the planning of the their wedding. -tvguide

Spoilers ahead, and I'm not kidding around. You not only want to watch this episode before reading my review, you'll want to have watched the entire series up to this point, because I'm bringing the spoilers. That's right, there's a spoiler here, a spoiler there, it's like Oprah's Favorite Things and her favorite things are spoilers. You get a spoiler and you get a spoiler. That's why this isn't just red, it's bolded. That's how serious I am about warning you. I will spoil just about everything in the following writeup. Some things I might not have needed to spoil, but I did it anyway. That's how I roll, but at least I do you the courtesy of a warning. Other people would just let loose with the spoilers without warning you, but not me. I'm courteous. I spoil politely, as is proper in civilized society. In fact, I believe that even Miss Manners has attested to the need for spoiler alters in polite company. That's right, I just name-dropped Miss Manners. Deal with that.


Best Episode Moment: Ted and Lily share a vulnerable moment on the roof.

Best Character Interaction: Ted and Marshal pretend they're in 'The Departed.'

Best Sign Barney Loves Robin: He got her dad to apologize.

Best Meme: I can haz cheeseburger?

Most Terrifying Oder: A jazzy pizzazzi razzleberry rainbow milkshake with a swirly straw

Best Sight Gag: Marshall getting a face full of "not confetti"


Best Sagat Narration: "And kids, lucky doesn't even begin to describe it, because if Robin and Barney had taken my stupid advice and hired a DJ, I never would have met your mother."

Any hint about The Mother? She's the bass player in the best wedding band in the tri-state area.

Any hint about The Wedding? On May 25, 2013, Robin and her father will dance while Ted's future wife plays in the band. It's probably safe to assume that Barney and Robin go through with it.

Do we like Ted this episode? It's a wash/ Yes, he band-blocks Lily and is very annoying with the wedding planning, but his pain is real and understandable. If this is part of his growth as a person, then things look good for him.

Overall Opinion of the Episode: Today we got a huge piece of the puzzle, probably the biggest piece since the time Ted dated his future wife's roommate. We learned a little more about The Mother and a lot more about how Ted meets her. This episode helps tie everything in the series together, and now it makes a lot more sense.

Let's recap: Ted meets Robin and dates her for a year. After their breakup, he copes with a drunken rebound that results in a butterfly tattoo. He falls for Stella, the doctor who removes said tattoo, and they get engaged. She leaves him at the altar for Tony, who feels so guilty about it that he uses his rich family's connections to get Ted a job as a college professor. At college, Ted meets Cindy and goes out with her for a while, and Cindy was roommates with The Mother. Meanwhile, Robin and Barney have an on-again, off-again, on-again relationship and get engaged. They need a last-minute wedding band, and when Ted runs into Cindy (and her wife), they tell him that Cindy's former roommate (The Mother) plays in a wedding band. And kids, that's how Ted met your mother.

It makes sense to start all the way back in 2005 when Ted meets Robin, because if he hadn't fallen hard for her, she'd never have been a part of the group, fallen for Barney, and required a wedding band. It also makes sense to tell what seems like a long, meandering story. Obviously, a lot of details had no bearing on Ted meeting his future wife, such as Zoey or designing the GNB headquarters. And that's a shame, because I was hoping that the reason Ted had to break up with Zoey and build the skyscraper was because without it, he'd never have met The Mother. (It will might come into play, who knows.)

After all, there are still a few details left. For instance, we still don't know the deal with the yellow umbrella. (Other than ir being an awesome plot device.) Somehow, Ted getting ahold of it and then getting it back to her will play a part. We do know that it will blow down the street at some point, and that's critical to the story as well. So we don't have the entire picture, but it's coming into focus.

What's very clearly in focus is the end date: May 25, 2013. While it was getting pretty obvious that Ted was going to meet his future wife at the end of this season,it's nice that we finally know precisely when this long story is coming to an end. I admit, I had my doubts, and I still do, but after Barney's proposal and tonight's episode, my confidence is renewed.

In addition to getting a big meaty piece of story, this episode also gave us a good meaty bit of character work, courtesy of a great roof-top conversation between Lily and Ted. Since this season has been covering all the parenting tropes, naturally, we'd have the moment when Mom doesn't want to be a Mom. Lily's confession was very real and heartfelt, and I wonder if, like many of the pregnancy storylines, it came from Alyson Hannigan's own experiences.

I loved how it came about, too. Lily needed Ted to confess to something horrible, so she confesses to something even worse - she wants to run away. (Again.) It reminded us that Ted and Lily have been good friends for a very long time, and it was wonderful to see them both share such an honest and vulnerable moment. It's also refreshing to have a show be a little more honest about having a baby, and that it's not 24/7 bliss.

And then, just to make sure it didn't get too maudlin, Marshall gets a face-full of "that wasn't confetti." I'll allow it.

I thought the storyline with Robin's dad was cute, because Ray Wise is just so fun and menacing. Even when he's trying to get in touch with feelings and enjoy life, he's scary, and that provided for many of the episode's funny moments. He and Neil Patrick Harris played well against each other, particularly when Barney was utterly terrified.

However, this was yet another example of blatant character retconning. Robin's dad was originally played by Eric Braeden, and he was not a menacing character. His Robin Sr. was stern, disapproving, and ever-wishing that Robin was a boy. Even Ray Wise's early portrayals were more reserved and in keeping with the character. This episode was too much of a departure, and besides, they kind of covered menacing with 'The Captain.' Still, I can never stay too mad at Ray Wise. (In fact, it's unwise to.)

Overall, this was a strong episode and it's strengths greatly outshone it's one, slight, weakness. If this is what we can expect as the show makes it's final lap, then I will be a very happy viewer.

Read more of my 'How I Met Your Mother' reviews here
Posted by Charles B. French at 7:32 PM

Email ThisBlogThis!Share to TwitterShare to FacebookShare to Pinterest
Labels: Band or DJ, Episode Review, How I Met Your Mother, Ray Wise