How I Met Your Mother: "Splitsville" 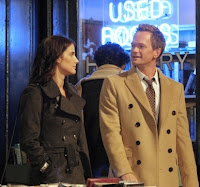 Quick Review: Glad that's over with.

Episode Synopsis: Robin has a problem pulling the trigger on breaking up with Nick, so Barney steps in to help out, while new parents Lily and Marshall look for a way to schedule some private time for themselves. -tvguide

Spoilers ahead, so you might want to watch the episode before you continue on. And while you're at it, you can do some sit-ups. A few wouldn't kill you. Unless you suffer from that extremely rare condition in which a few sit-ups would kill you. And that would suck, because then you'd spend the rest of your life never knowing what it's like to do a sit-up. You'd watch everyone else, and then you'd have no recourse but to lift your face to the heavens and demand to know why, why you were afflicted with this curse. So really, it kind of puts the whole spoiler thing in perspective.

Best Basketball League: The Little Ivies Professionals Over 30 Who Work in Midtown League

Biggest Bullies: Those kids from that Hebrew school

Best Place to Break Up: Splitsville (I think that's their actual motto)

Any hint about The Mother? I'm pretty sure she thinks Ted's shot should count.

Any hint about The Wedding? To save money, Barney might just e-vite everyone.

Do we like Ted this episode? I find his use of geometry to score a basket endearing.

Overall Opinion of the Episode: Let's start with that worked. I liked Barney appearing out of nowhere to declare his love for Robin. He claims to be lying, but he was actually telling the truth. He has a habit of doing that, claiming the truth is a lie, so that's not out of character.

In fact, you may remember Barney and Robin "lied" about being a couple so Lily would let them out of their room. (It's not considered kidnapping if it happens on a sitcom.) They thought they had Lily fooled, when in fact, they didn't realize that they weren't lying. This time, I don't know if Barney thinks he's lying. He's at the point where he might put on a good show, but he not only has feelings deep down, they're pretty close to the surface. This is perfectly in character for Barney.

We also saw Ted perfectly in character. There are worse ways he could be handling the break-up, and this one was amusing. Ted "coaching" a basketball team and arguing over the non game-winning shot worked for me. I still want to actually see him teaching or designing buildings, but this is something.

Then we have Lily and Marshall with a very implausible subplot. As usual, they get tagged with all the new parent tropes. This week it's not having sex. While a very real problem new parents face, the fact that they have Lily's father, Mickey, as a nanny should have taken care of that scheduling conflict. This is the episode you have before the nanny episode, not after; for a series that prides itself on maintaining continuity, I just felt disappointed that the reason wasn't something deeper.

Overall I've been disappointed with the Lily and Marshall as parents stories. Those two are great characters, but these new parent situations are being awkwardly thrust upon them (something Lily wants described to her in detail.) Rather than let these parenting challenges be more organic to these characters and situation, we get a new a new wacky "look at the crazy new parents" story every week, and it's getting old. The show needs to let Marshall and Lily be themselves, because those are two parents whom I'd love to see in action.

Then we get to the final nail in Nick's coffin. He made a good impression on me his first few appearances, and nowhere did he come cross as stupid. A bit awkward, emotional, and out of touch on the notion of cool, sure. But an out-and-out dumb guy? I just didn't buy it. It seemed like another shoehorned plot device that we never saw in previous episodes.

There was enough in his character already to play with already, but this episode seemed to forget that Nick was a TV chef on a low-rated network who thought his corn scooter was the height of cool. It traded in that comedy cold for "Nick's dumb." That was not an upgrade Nick needed; there were plenty of reasons Robin could have broken up with him already.

This is my biggest fear for the show, that it ultimately forgets who its characters are, especially in that episode when we'll finally meet The Mother. This series has been all a big setup for that moment. (Those kids have been sitting on that couch for a really long time.) When it happens, it needs to be in keeping with all the show has accomplished up to that point. While the appearance of the bass guitar gives me hope, episodes like this make that harder.

The good news is that the Autumn of Break Ups is finally over, so we've got that going for us.

Read more of my 'How I Met Your Mother' reviews here
Posted by Charles B. French at 9:01 PM

Email ThisBlogThis!Share to TwitterShare to FacebookShare to Pinterest
Labels: Episode Review, How I Met Your Mother, Splitsville