How I Met Your Mother: "Lobster Crawl" 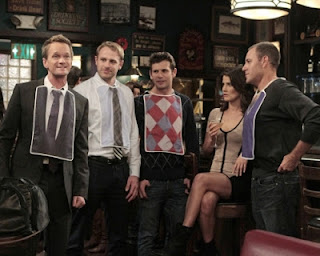 Quick Review: If you like Robin too much, this episode will cure you of that.

Episode Synopsis: A determined Robin contemplates one last fling with Barney and devises a scheme to entice him into an assignation. Meanwhile, Ted steps in as Marvin's nanny, and Marshall and Lily realize there's a definite motive behind the move. -tvguide

Spoilers ahead, so watch the episode before you proceed, but really, while for some episodes you'll hate yourself for spoiling things, you probably won't be filled with such incredible self-loathing this week. You'll find yourself quite easy to forgive. It's not like you went and ate lobster even though you're allergic. No, you just read ahead and found out what was in the episode before you watched it. However, if you realize that you're better off skipping this episode, then you didn't spoil yourself, you dodged a bullet.

Best Jobs We Forgot Ted Had: Architect and Professor

Best Babysitter Qualification:  "What the hell?"

Best Hair Split: It's a baby at a "restaurant," not a bar.

Worst Idea: Handing children candy while you're half-naked and not a parent

Best Way to Get Marshall's Attention: Two girls together

Best Callback: Robin has her own version of Barney's playbook.

Any hint about The Mother? She's probably not the one who cries on the first day of pre-school.

Any hint about The Wedding? You just know Patrice will wind up a bridesmaid.

Do we like Ted this episode? He was already annoying  until the Cleveland Browns jersey sealed it. This was not his week.

Overall Opinion of the Episode: When did Robin stop being awesome? I've been watching the first few seasons on DVD, and the comparison of Robin then and now is jarring. Robin used to be a force of nature, and even though she struggled with the notion of relationships, she was still an interesting character as she did so. Tonight Robin wasn't interesting or funny or entertaining. She was unbearable.

The idea that she wants Barney now that he's stopped chasing her is sound. It's a natural response, but I just can't accept that her only way to approach Barney was to revert to her teenage self. She could have been a grown-up as she tried to get Barney out of her system one last time, and I blame the writers for once again destroying Robin's character because they can't figure out a thing to do with her. (Let's not even talk about what Robin does when told she's allergic to lobster and can't have any.) The show is better than this.

Why not have Robin throw herself into her work to forget about Barney? I love Robin the on-air personality, why not have more of that? Why not have Robin try, and fail, to get back to her 2005 awesome roots as she works to get over Barney. How about she becomes more appealing, not less. Instead, the only aspect of Robin that I liked was her Inner Voice of Reason, and even that had the good sense to bail early.

Speaking of forgetting people have jobs, this is the first episode in a long while that the show acknowledged that Ted actually has a career.  We haven't seen his college class in ages, which is a shame because Professor Mosby is one of my favorite versions of Ted.

The real sin of this series is the fact that we didn't see Ted working on the GNB building, adding his own touch to the New York City Skyline. That was supposed to have been his dream job. After all, the reason things went so bad between him and Zoey is because she stood in his way of designing the building. However, we haven't heard about Ted designing that building since the beginning of last year and it's completion was treated as an afterthought..

Why didn't we hear about Ted's building until it was done? Why did we get more episodes about Ted and his doomed relationship with Victoria than we did Ted designing a building? This show isn't just about how Ted meets the mother of his children, it's also about how he grew as a person to be the man she could fall in love with. The show really missed an opportunity by not using the GNB building to grow Ted as a person. Instead of seeing how designing a building can change am an and make him ready to be a husband and a father, we get episodes like this where Ted gets too involved with his friends' kid.

Lily and Marshall were back in their usual roles as first-time parents. This week's adventure was missing all their baby's firsts, whether it was Marvin crawling, eating spaghetti, or meeting Santa. I like the idea of wanting to be there for the firsts, and it would have been a better story without Ted's involvement, or Lily being obsessed with Barney's bib or being Robin's plus-one. Again, it was another missed opportunity because what we needed to see was Marshall and Lily actually getting a first with Marvin, not just stealing all the firsts from Ted's daughter. (Hasn't she suffered enough?)

The one bright spot this week was Barney. Whether he was slapping away Marshall's hand or trying, and failing, to revive his stained tie, Barny was always entertaining this episode. The bro bib was one of his better "bro" ideas, and I absolutely loved his moment of revelation when he realized that he'd rather play Crazy Eights with Patrice than have a shallow hookup by the weather map.

They clearly get it with Barney. He can still be as silly and bro-centric while at the same time realizing that he wants more from his life than empty one-night stands. If Ted and Robin had that level of growth, this would be a great episode and a much better series. As it is, I'll take what I can get.

I do like where they're going with Barney, and I just hope that Ted and Robin shape up, and quickly. I still believe that this show can achieve great things, but if episodes like this are what we have to look forward to, I shudder. We've got two episodes left this year, one of which is an hour-long two-parter, so let's hope they get their act together before the new year.

Read more of my 'How I Met Your Mother' reviews here
Posted by Charles B. French at 8:18 PM

Email ThisBlogThis!Share to TwitterShare to FacebookShare to Pinterest
Labels: Episode Review, How I Met Your Mother, review