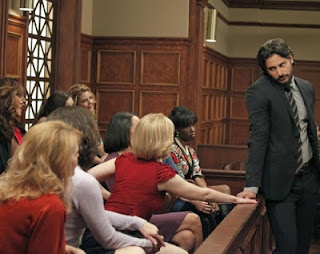 Quick Review: I have no objections to this week's episode.

Episode Synopsis: In the most important case of his career, Marshall is pitted against his old friend Brad. Meanwhile, the gang recall youthful entanglements with the law and debate over who was the most notorious teenage delinquent -tvguide

Spoilers ahead, so make sure you've seen the episode before you proceed any further. Seriously, this is a very tense legal thriller and it will keep you guessing to the very end. You will be shocked by all the reveals, and I think you'll want to remain unspoiled. Otherwise when you do watch the episode, you'll see every twist coming, and what's the fun of that? If you are spoiled, don't even think about trying to sue me, because it won't stick. Not only is this spoiler warning iron-clad, I've got a great lawyer who will argue my case in a pair of three-thousand dollar shoes, a powdered wig, and nothing else. Did I mention he was British? Because no one can resist his British accent. I don't know why he wears nothing but that powdered wig to court, though. Quite frankly, I'm a little worried about him.

Worst Way to go Through Life: Drunk, naked, and riding a zamboni

Worst Opening Icebreaker: "Those robes do you all justice."

Best Apology: 11:15 brunch rezzy for two at the Popover Pantry

Best Callback: Scooter, or as he's known on the streets, "Jeff."

Any hint about The Mother? She probably was a teenage badass

Any hint about The Wedding? Since Barney has stopped trying to win over Robin, did she propose?

Do we like Ted this episode? He rallied the gang to support Marshall and gave Barney massive hemorrhoids. What's not to like?

Overall Opinion of the Episode: As tense legal thrillers goes, this one did not disappoint. We finally got to see lawyer Marshall in action, and even though he was outgunned by his fresh from Magic Mike rival, he won the day. This is the Marshall I've wanted to see, a crusader who's fighting for the future world his son will inhabit.

The legal back and forth between Marshall and Brad was very fun to watch, especially Brad's blatant pandering to the jury (whom the title refers to) and judge. I loved that Marshall was able to use that technique to his own advantage, as it was a great payoff. While it's too bad this is probably the only real lawyering we'll see Marshall practice in a courtroom, I am excited about Judge Marshall. That will be a sight to see a little ways down the road.

I loved the fake-out. They wanted us to think Marshall was in deep trouble for his antics in the courtroom, and I kept waiting for that moment when he crosses the line. Instead, it wasn't a big mistake on Marshall's part, it was his act of kindness that redeemed his friend Brad. (Who is a fun character but tolerable in small doses.) Marshall stuck to his principles and restored the Brunch Bros. to their former glory. I call that a happy ending.

The B-plot, everyone claiming to be a teenage badass, was also amusing. It's totally in character for the gang to want to impress each other with how hard-core they used to be. Barney did it two seasons ago when he tried to convince Robin that he had nearly destroyed a museum, and Ted is always looking for ways to appear cooler to his friends. (Not to mention his kids, which is why he probably tells them all those stories about his multiple sex partners before he met their mother.)

Lily, of course, had the best badass stories, and while we don't quite know whether those stories are completely true, we know she can be pretty scary when she wants to be. Her stroll through the streets making others cower in fear reminded me of her turn as her own evil vampire doppelganger back in her Sunnydale days. I kept waiting to hear her explain "bored now," but that might have been too on-the-nose.

We didn't get a lot of time with Barney and Robin this week, but what we got worked for them. I liked Barney's solution to dealing with his feelings for Robin, and whether this is genuine or just a manipulative play, it's that kind of character moment I like to see in him. Now, of course, Robin is starting to be interested again, and we'll probably see some resolution to this next week.

This episode was a great payoff to last week's setup, and set up another story we'll see pay off next week. (At least, I hope we do, because we don't have a lot of time left in the story.) They still haven't quite recaptured the magic of the first few seasons, but I think they're doing better than last year's water-treading. We'll see what happens next week.

Read more of my 'How I Met Your Mother' reviews here
Posted by Charles B. French at 8:04 PM