How I Met Your Mother: "The Stamp Tramp" 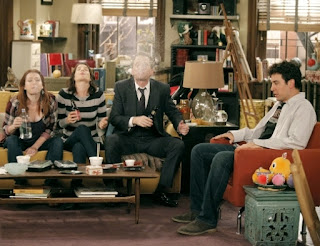 Quick Review: This one gets my stamp of approval.

Episode Synopsis: Marshall recommends an old law-school buddy for a position at the firm, but the job interview doesn't quite work out, and Marshall needs to square things with the boss. Meanwhile, Robin helps Barney get back into the swing of things on the gentlemen's-club circuit. -tvguide

Spoilers ahead, so you might want to hold off reading any further until you've watched the episode. I know, it's a tough decision, but seriously, there's no need to hold a press conference. Even if you do use a Brodium. Look, I get it, you think that all of America is eagerly awaiting the direction your fickle heart will take you. Not me, though. Honestly, just send me a tweet and and I'll read it when I get around to it. I just don't have so much free time that I clear my calender to sit around and wait for someone to make up his mind.  Look, watch the episode first or don't, there's no need to be such a diva about it.

Best Episode Moment: We learn that Lily got Ted's stamp of approval, and also learn that you should stop the tape while you're ahead.

Worst Episode Moment: Yet another future Ted "We'll get to that" moment.

Worst Use of Sabermetrics: Money Balls

Worst Thing That Can't be Real: Skimming off the top of the strip-club swag

Best Stamp: Marshall stamping his stamp (Make your own "so that's what they're calling it now" joke here.)

Scariest Thing in the World: A hot-dog with a face

Biggest Jerk Who is Totally Six Foot One: Honeywell

Any hint about The Mother? She's going to find college Ted adorable.

Any hint about The Wedding? Robin is going to have a wild bachelorette party.

Do we like Ted this episode? Despite making himself such an easy target for mockery, or perhaps because of it, he appears to be the glue that holds our gang together. We're good this week.

Overall Opinion of the Episode: We're back to theme episodes again, and this was a good one. It's about credibility this week, whether one's "Stamp" is worth anything. Marshall gives his stamp of approval to everything, even his own stamps of approval, and we learn how that renders them worthless. I'm a sucker for clever wordplay, and the idea of "Stamp Tramps" is just too amusing. It's a great plot device that not only fully explores the theme, it sets up a fantastic twist at the end with Marhsall's old bro, Brad.

I admit that I didn't see Brad's betrayal coming. It was already a strong storyline with Marshall losing all credibility in the eyes of his boss over his stamp trampiness. Having it so completely backfire was just gravy, and Brad completely screwing over his former classmate was the perfect twist. While I loathe having to wait next week for the resolution, I have to admit it's a great setup and I can't wait to actually see lawyer Marshall in action.

It's been eight years, and we've never actually seen Marshall lawyer it up in court before. He's done legal interning, legal paperwork, and the occasional legal negotiation. But actual courtroom drama is something we've never seen before, and the prospect of seeing Marshall drop and fully contextual "lawyered" is what this series needs. I'm actually shocked, and a little disappointed, it's taken this long for this to happen.

I'm really glad we're seeing Marshall and Lily doing more than embodying the typical first-parent cliches. We get to see the kind of lawyer Marshall is with a kid to fight for, and Lily gets to bust on Ted while caring for a baby. Honestly, this is the most I've liked them all season.

Even Ted was charming, and that's mainly because of his dawning realization that his college self was an idiot. It made me glad that there's very little video footage of myself from college, because I'm pretty sure I was just just as insufferable. I wonder if this plotline comes from the writers taking a long, hard look back and realizing that their college doppelgangers were not nearly as cool as they remember.

Robin and Barney escaped the contrived pair trope by the sheer ridiculousness of their story. Barney as a strip club free agent was typical for his character, and Robin being a tough but easily-bribable agent made for a good excuse to get them together. The two of them had good chemistry together, and while their kiss was pretty telegraphed, it wasn't unwelcome. Clearly we're seeing the rekindling of their relationship, and it actually does make a little sense.

Robin and Barney go on a quest to find Barney another strip club to frequent. When Robin does get back together with Barney, she goes in eyes open knowing the kind of man she's getting. After all, she knew the kind of man he was last time, too, and trust was never their big issue. (Bad writing was their issue.) Neither one doubted the faithfulness of the other, and we saw that when, a little ways down the road, Barney didn't feel the need for a pre-nup with Robin.

So far I'm not cringing at the Robin-Barney storyline. There's still plenty of chances for missteps, but I like what I'm seeing so far. If we can have more of this, and less of what happened last week, then my optimism for Ted and The Mother will be strengthened. We had a good episode this week, and I hope they keep up the good work.

Read more of my 'How I Met Your Mother' reviews here
Posted by Charles B. French at 9:05 PM

Email ThisBlogThis!Share to TwitterShare to FacebookShare to Pinterest
Labels: Episode Review, How I Met Your Mother, Stamp Tramp