How I Met Your Mother: "Who Wants to be a Godparent?" 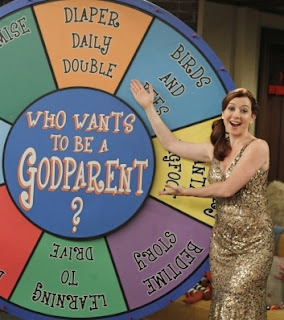 Quick Review: It all but ignores the outside relationships and focuses on the gang, and it's all the better for it.

Episode Synopsis: Unable to decide which of their friends would make the best godparents to Marvin, Lily and Marshall put them all to a test. -tvguide

Spoilers ahead, so you might not want to read ahead if you haven't seen the episode. That's like skipping ahead to the end of a book to find out who did it. Really? That's how you read? Well, it looks like someone is not going to get to watch any television at all tonight. Ok, you can watch television. But nothing violent. Ok, it can be a little violent. In fact, if you're planning to watch Die Hard, count me in. That movie gets better and better. Anyway, there's an episode review below that I have to get to, but after that, we're watching Die Hard.


Best Episode Moment: We learn that Ted's kids are quite familiar with Professor Infosaurus.

Worst Episode Moment: The broller, mainly because right this moment someone is building it in real-life.

Best Character Moment: Lily and Marshall realize they haven't been very good friends and revoke the "8 or higher" rule.

Best Character Interaction: Ted, Barney, and Robin arguing over who is the most fit godparent.

Best Character Progression: Lily and Marshall re-emerging as an integral part of the gang.

Worst Character Regression: Barney, back to his creepy womanizing self.

Biggest Question: Why is Marshall staring at the wall?

Any hint about The Mother? She must also believe Professor Infosaurus will be a bit, big hit with children.

What do we know about The Wedding? We're finding out more and more why Robin and Nick aren't going to stay together.

Do we like Ted this episode? I admit it, I like Professor Infosaurus. It's a very Ted kind of concept, and it's a glimpse of the man he's going to be.

Overall Opinion of the Episode: While Ted and Robin are still in relationships, the show decided to focus back on our gang of five. I, for one, liked that very much. It was nice to see the gang bickering, arguing, busting on each other, and even confronting each other with some hard truths. In the end, we got to see everyone make up as they shut down McLaren's and it was a nice moment that played to the show's strengths.

While last season looked at how the gang had gotten too close for comfort, this season we're seeing them drifting apart, largely due to new baby Marvin. Par for the course this season, Lily and Marshall hit yet another typical baby plot: abandoning their best friends because they're focused on their baby. This time they mixed it up with trying to choose a godparent and Marshall's penchant for inventing games, meaning it was one of the best new-baby plots I've seen in awhile.

The contest of who would be the better godparent was perfect because it played right into the characters of Ted, Robin, and Barney. Marshall is, of course, the perfect game-show host, and I loved how all the fabulous prizes went to Lily to keep her happy. (And not crying over her and Marshall's impending demise.) It was also fun seeing Marvin at various stages in his life as he interacts with all his potential godparents.

The game was a great premise that led to a very honest moment of the show: the giant chasm with Ted, Robin, and Barney on one side and Lily, Marshall, and Marvin on the other. Marshall and Lily had a valid point, they were new parents who had a whole new priority, and their friends didn't get that. But Barney also made a good point, that they were all supposed to be friends and yet Marshall and Lily didn't seem to care about what was going on in anyone's lives. There were no real bad guys here, just friends who drifted apart.

I like how Lily and Marshall were the ones to bridge the divide, and I especially like seeing the gang back together. It's the kind of kiss-and-make-up moment that the show used to be very good at. They get angry, they fight, they work through it. Throw in a ridiculously large wheel and you've got yourself an episode.

That left Nick and Victoria, who had one scene each this week. Given the strength of the episode, we didn't need much of them except to once-more be reminded why those relationships are going to implode very soon in the "Autumn of Break-Ups." (Also the next episode's title, so guess what's happening then.) While I won't be sorry to see those relationships end, I am sorry that we didn't get to see more of Robin and Nick.

Nick, you may remember, made a brief appearance in season 6 as a guy Robin keeps running into but never being able to date. We were promised we'd see Nick again, and this season kept that promise. However, I've never been satisfied with him just appearing in Robin's life. I wanted to see how those two managed to actually get together, especially since Nick thought Robin and Ted were engaged the last time he saw her. Was there more confusion in their meeting, or was it a case of boy meets girl and girl meets abs? Perhaps the next episode will reveal how they managed to finally get together.

Finally, I have to talk about the moment that charmed me the most. yes, I can't seem to stop talking about that stupid dinosaur puppet, Professor Infosaurus. That's because it was a perfect Ted moment, not  only in its pure geeky nerdiness, but because it shows he's not half-bad as a father. This whole show is about a father telling his kids how he met their mother, and I always like seeing Ted being that dad, either to a potential god-child, or to his actual kids.

That's why Professor Infosaurus' appearance in 2030 was so awesome. You know his kids have seen a lot of that dino, and whether they want to admit it or not, it's been pretty helpful over the years. While master of telling really inappropriate stories ("Kids, let me tell you about this three-way I once had.") he is still a loving father.

I also like seeing Future Ted interacting with his kids, even if at this point it's with footage they filmed six years ago before the kids got too old. (It's what's surprised you when re-watching seasons 1 and 2: the kids actually talk.) The footage this week was timed just perfectly with the appearance of that puppet. If you watch closely, you can see his daughter tolerantly smile as he brings it out, and it's the exact kind of smile a teenager would have when her long-winded dad brings out the old puppet.

I really wish they'd done more with pre-recorded footage of those two kids to have more interaction, and I can't wait to see what they've allegedly filmed and locked away for the episode when Ted finally meets The Mother. Until then, I away the Autumn of Break-Ups.

Read more of my 'How I Met Your Mother' reviews here
Posted by Charles B. French at 8:31 PM

Email ThisBlogThis!Share to TwitterShare to FacebookShare to Pinterest
Labels: Episode Review, How I Met Your Mother, Who wants to be a godparent