How I Met Your Mother: "Good Crazy" 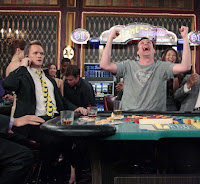 Quick Review: It's all setup for the season finale.


Episode Synopsis: Marshall freaks out when he realizes that fatherhood is staring him in the face. Meanwhile, Robin and Ted come to an understanding about their relationship. -tvguide

Spoilers ahead, so watch the episode before you proceed. Because if you don't, then you're going to be spoiled. That might drive some of you crazy, and not the good kind of crazy. The kind that puts you on the wrong side of the hot/crazy scale. You don't want that. Plus, it will totally ruin your good time, because you'll know exactly what's coming and it will put you in a bad mood for the rest of the day. And not even a condolence-five will cheer you up. Well, it might a little bit.

Worst Episode Moment: Realizing this was all just setup for the season finale.

Best Perspective: Quinn won't work as a banker because, as a stripper, she has standards.

Best Try Not to Think About it Moment: Marshall asks if there's any practice baby left.

Best Callback: We finally see what led to Marshall drunk at the blackjack table.

Any hint about The Mother? Hopefully she won't remind Ted of Robin. Or Robyn. Or any woman named after a bird.

Any hint about The Wedding? If the Ducky Tie can return once, it can do so again.

Do we like Ted this episode? I know I'm going to like him once he gets over this Robin fixation. It's been seven years. Time to finally move on once and for all.


Overall Opinion of the Episode: As I said before, this episode was all setup for the two-part season finale. Unlike the one-hour premiere, which was really just two episodes back-to-back, the final episode is an hour-long epic event. On the one hand, I can appreciate getting all the preliminaries out of the way for the main event. But that made this episode something we had to sit through.

It's not like this show doesn't know how to do a setup episode. Back in season two, the episode Showdown set up Lily and Marshall's wedding pretty well, all while being its own self-contained episode that was very enjoyable. This time around, the episode meandered between three story-lines without a sense of payoff. It wasn't that the episode was terrible, it wasn't, it's just that everything is being saved for the finale. (More on that later.)

Let's talk about what we did see. Once more the show had a theme: the condolence-five. I actually liked this gag, as it was used just enough that it was funny, and Ted using it on Barney was a great twist. Barney needed it because he's still upset with Quinn's job. (That whole stripper thing he can't shut up about.) After offering her a job, it looks like he and Quinn need to confront it once and for all, and what it means for both of them is unclear.

It appears that Barney is not the only one in the relationship upset with a significant other's vocation. Quinn clearly doesn't like Barney's job, and it might come down to both of them making a choice. If Quinn is to give up her job, will Barney give up his? If he's serious about this relationship, he just might, and it will be interesting to see if that's where the show goes. It would be a brave move, but I'd respect it.

Speaking of respect, Ted is losing mine again. I get that he is still dealing with Robin, but is there nothing else to him? He's an architect and a teacher? Can we see something to do with that? Could his getting over Robin involve him getting back into his career or the house he's restoring? We've seen Ted date, it's nothing new, and I'd love to see him apply his romanticism to his other pursuits. I like Ted the romantic architect. Instead, we get Ted seeing Robin in a beer bottle. (To be fair, that was pretty funny.)

But the big setup is Marshall and Lily. I did like Marshall trying to train for being a dad, and his wanting to be the best dad there is makes sense. He's an Erickson, and those men are very enthusiastic, and of course I can see Lily wanting to get rid of him for a little while. Naturally, that was the worst timing ever. We knew from The Naked Truth that Marshall wasn't going to be there when Lily gave birth, and I think we can all be grateful that she wasn't on an elevator at the time she went into labor. They're hitting plenty of cliches, they don't need to collect them all.

This, of course, leads us back to my original issue with the episode. It's all setup for the finale. We have three distinct threads. Ted and Robin will finally have to figure this thing out between them. (Mostly Ted.) Barney and Quinn will have to figure out what to do about their jobs. (And I really do hope that Barney will be willing to give up his.) And Marshall will have to figure out how to get to Lily in time for the birth of his son.

This show hasn't done so well with recent season finales. Season 4's The Leap was their last good one, but since then they've gotten a lot weaker. The show is at it's strongest when Ted is moving forward, whether it's making it rain, proposing to Stella, or taking the leap and becoming a professor. The last two years, he went blonde and tried to get back with Zoey - hardly a strong finish. (And the less we say about everyone else's plotlines, the better.)

It looks like this time she show is pulling out all the stops with the hour-long story, and with this kind of setup, it needs to deliver. I'm keeping spoiler free, so I don't know what's happening, I can only lay out what I think we need to see. I want some serious resolution. It's time. We need to see everyone taking big strides into the future, not continuing in their holding pattern. I'd like to see real character growth, especially in Ted. I want to see Barney become the better man his father told him he could be. I want to see Marshall show us that he can be the awesome dad we know he is. We need to see something big, something memorable, something surprising, something game-changing.

This season has had a few big moments, from Marshall and Lily's dads in bed together, to Robin not being able to pole-vault. They gang has endured hurricanes, drunk trains, and burning beekeepers. Old relationships ended and new ones began. It's been a busy season, but at the same time while they've packed so much story in, the show feels like it's treading water and waiting it out until we meet The Mother and attend The Wedding. We know the endgame is coming, but as an audience we want to do more than mark time.

We have at least one more season, that much is confirmed, and I'd like to see this last season be more than just a continuation of the weekly slog towards the end. The show is in a position to take some big risks. This finale is a chance to set the tone for the rest of the series, to let us know whether we're in for a real treat as Ted finally meets the woman of his dreams, or if we'll just be glad it's finally over.

In two weeks, we'll see whether Lily's delivery delivers, and I'll be there to talk about it.

Read more of my 'How I Met Your Mother' reviews here
Posted by Charles B. French at 7:02 PM

Email ThisBlogThis!Share to TwitterShare to FacebookShare to Pinterest
Labels: Episode Review, Good Crazy, How I Met Your Mother