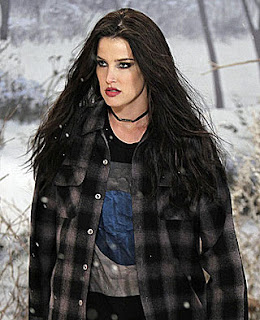 Quick Review: Robin Sparkles is back! What more do you need?

Episode Synopsis: Barney discovers a lost episode of a behind-the-music show that features Canadian teen singing sensation Robin Sparkles (aka Robin), and includes a new video and another intriguing revelation from her past. Meanwhile, Marshall and Lily suspect that Ted's new girlfriend is a stalker.  -tvguide

Spoilers ahead, so you might just want to watch the episode first before you proceed. If you get spoiled on this episode, you might go into a dark place. A very dark place. And then you'll start wearing flannel, dye your hair black, and wind up with a Canadian restraining order, which is like an American restraining order but it's a bit more polite, measured in meters, and it comes with a donut. Because it can be rough getting that restraining order, and they're really sorry to have to do it to you, so they give you a donut so you'll feel better. So hey, no hard feelings. Enjoy the donut, and maybe take in a hockey game while you're there.

Best Episode Moment: The video for PS I Love You

Worst Episode Moment: Anything with Ted and Jeanette

Best Documentary: Beneath the Tunes

Best Denial: Dave Coulier is not the subject of a bitter song by a Canadian pop star. Why do people keep thinking that?

Best Sagat Narration: "I always liked that joke." - in response to Dave Coulier's 'cut it out.'

Best Callback: Pick something from the Robin Sparkles universe. Any one of those.

Any hint about The Mother? Ted must be her Dobler.

Any hint about The Wedding? I know what song probably won't be played at the reception.

Do we like Ted this episode? No, and it's a wonder he even lived long enough to meet The Mother.

Overall Opinion of the Episode: Let's start with the least interesting plot: Ted dates his stalker. That's pretty much it. He shouldn't be with her, he goes out with her anyway. Didn't we just go through this last time? Look, we know Ted's about to meet The Mother. Can we start focusing on all his other qualities that we used to enjoy?

The only fun part about Jeanette is that she's played by Abby Elloitt, Chris Elloitt's daughter. Chris Elloitt plays Lily's dad, who sometimes hooks up with Marshall's mom. This means that Ted could be having a fling with Lily's half-sister. The gang really is too close for its own good.

This episode does give us a cute theme: Dobler v. Dahmer. It's the idea that if you are into each other, creepy, stalkerish behaviors are cute (Lloyd Dobler from Say Anything, holding the boombox above his head.) If you're not into each other, those behaviors are creepy (Jeffrey Dahmer killing and eating you.)  It was a nice recurring theme that applied across the board.

The reveal of how Lily really met Marshall was cute, and it's always fun to see a return to Goth-Lily circa 1996. (Which seemed to be a theme that year.) Presently, Barney went super-obsessive to find out who Robin stalked back in 1996. (And she did have a stalker at one point, but that might be over now.) After a donut fueled conversation with Robin's ex, Simon (James Van Der Beek is always fun to have around), Barney discovers what we all knew was coming: The final chapter in the Robin Sparkles saga.

This made the episode for me. Ever since "Slap Bet" this show has been careful to dole out Robin Sparkles in just enough increments to keep her from being overplayed. The last time we got a glimpse of our favorite Canadian teenage pop star was when she starred in Space Teens with Jessica Glitter and Alan Thicke. That's how it all began for her. Now we finally learn how it ended. Robin Sparkles didn't quietly fade into obscurity after Sandcastles in the Sand flopped. No, she went out with a grungy bang.

I loved this final send-off to the character we've grown to love. Naturally, we had to have one last Robin Sparkles video. While "Let's go to the Mall" and "Sandcastles in the Sand" were great send-ups of 80's music videos, "PS I Love You" is the perfect tribute to much of the videos in rotation during the 90's. Cobie Smulders proves herself more than capable of channeling her inner Alanis Morrisette for this video, which is clearly inspired by Morrisette's angst-ridden break-up song "You Oughta Know." It's a perfect mix of parody and tribute. While not as strong as the other two videos, "PS I Love You" is a solid entry in the Robin Sparkles catalog.

Not only do we get another great Robin Sparkles video, but we get the Canadian Version of Behind the Music: Underneath the Tunes.The special features an amazing cavalcade of Canadian stars as they discuss Robin Sparkles and her final dark days as Robin Daggers. As someone who has watched quite a bit of "Behind the music," I can say they nailed this as well.

My favorite appearance was Dave Coulier, because while we've had plenty of Buffy/Angel reunions, it's about time we got a Full House reunion. Coulier was exactly right for this episode because he's reputed to be the inspiration for "You Oughta Know," which makes you look at "Uncle Joey" in a whole different light.It was perfect stunt-casting.

The big reveal, of course, is who Robin was stalking. I thought Paul Shaffer was a perfect choice. He's an iconic musician, and not just for being on Letterman all these years. He's got a great sense of comic timing, and his back and forth with Jason Priestly was hilarious.

While this episode was written as the great swan song of Robin Sparkles, we don't know what will happen next season. With the confirmation of a ninth, and final, season of How I Met Your Mother, there might yet be an encore performance. We've seen the extent of her career, which means there's only one thing left: the reunion tour. If the Police and New Kids of the Block can do it, why not Robin Sparkles? She and Jessica Glitter might get the band back together one more time.

Overall I enjoyed myself this episode. If this is the last we see of Robin Sparkles, I think I'm satisfied. Despite Ted being annoying as usual, this was a strong outing and everyone else was in top form. It was well worth our time.

Read more of my 'How I Met Your Mother' reviews here
Posted by Charles B. French at 7:44 PM

Email ThisBlogThis!Share to TwitterShare to FacebookShare to Pinterest
Labels: Episode Review, How I Met Your Mother, PS I Love You, Robin Daggers