How I Met Your Mother: "The Final Page" 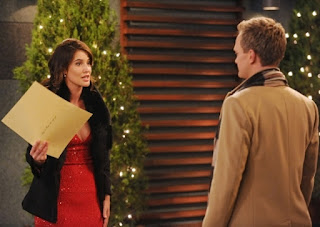 Quick Review: This. This is what How I Met Your Mother is all about, and it's the best episode of the season so far.

Episode Synopsis:
Part 1 - Robin takes steps to have Patrice fired from WWN, while Marshall puts a jinx on Barney. Later, Ted invites his architecture professor to the dedication of the GNB building; and Marshall and Lily bump into an oddball acquaintance from college.
Part 2 - Christmas approaches and Ted wrestles with whether to tell Robin about Barney's intentions involving Patrice, while Marshall and Lily get an early Yule gift, a night away from Marvin, but a case of separation anxiety strikes and threatens to ruin the evening. -tvguide

Spoilers ahead, so you'll want to watch the episode before you read on. Seriously, you want to watch it. And not just because you might be reading this aloud at the exact same time someone else is reading it aloud and get jinxed, though that is a real possibility. No the real reason is that this is a great episode, the best of the season so far, and you don't want to get spoiled this time. You'd regret getting spoiled, and no amount of tubas, xylophones, and robot voices would comfort you.

Best Reveal: Barney and Patrice's "relationship" was all an elaborate set-up for Barney to propose to Robin.

Creepy Reveal: There are hidden cameras pretty much everywhere

Best Moment of Dawning Realization: When Creepy Darryl is more emotionally centered than you, you need to reexamine your life.

Best Return: Ranjit, who totally can't hear everything about Barney proposing to Patrice

Best Callback: Barney got hit by a bus because of a broken jinx

Any hint about The Mother? Ted will probably make an ass of himself for her, and she'll love him for it.

Any hint about The Wedding? Barney's duplicitous proposal might be one of the reasons Robin has doubts about it.

Do we like Ted this episode? Yes. Ted really grew up in this two-parter, and nothing showed that more when he brought her to the WWN building to go meet Barney.

Overall Opinion of the Episode: This episode is pretty much everything I've wanted for the past few weeks. They do read my blog! (No, no they don't.) If this is any indication of where the show is going and how it will finish out the story of how Ted meets The Mother, then I'm going to be very, very happy.

Let's start with the end: Barney's proposal. Was it a bit underhanded to lie to Robin and drive her crazy? Probably, and that might be one of the reasons Robin has reservations about marrying Barney. But in Barney's mind, this is how his story ends, with one last, epic play. If this was to be the final play of his playbook, then he wanted it to be good. So I get why he'd do it, and it's a much more satisfying proposal than the one in The Magician's Code. (Two proposals in a year? He's worse than Ted.)

It also makes sense that Barney would feel like he needs to go through this charade to know, once and for all, where he stands with Robin. he may have also wanted Robin to actually think about whether she wants to be with him, and by pretending to date Patrice, he made her realize that she still was in love with him. For a normal guy, this would be awful, but for Barney, it's charming.

I do love the reveal, especially looking back on the past few episodes to see what was going on behind the curtain. I loved that Barney knew Ted, Robin, and Lily were in his apartment, and his discussion with Patrice about his friends' lack of boundaries was hilarious, and very ironic given Barney's ability to monitor everywhere from his phone. (A suble form of product placement.) It's this kind of clever writing that the show has been lacking, and I'm happy to see then return to form.

The other stories were just as good. The gang jinxing Barney turned out to be a great running gag, especially with Barney's creative use of the notepad. Barney's jinx revenge was just as funny.

It was another Buffy reunion, this time with Seth Green as an old college buddy of Marshal and Lily's. His obsessive hacky-sack stalker was a great character, especially with his own reveal of being the "Mark Zuckerberg of Jam Band Parking Lot Accessories."

Interesting trivia tidbit, Green was on Buffy the same time as Alexis Denisof, who was also in this episode as our favorite walking sexual harassment lawsuit Sandy Rivers. On the show, Seth Green and Alyson Hannigan's characters (Oz and Willow) were a couple. In real-life, Alison Hannigan and Alexis Denisof are married. Now all we need is an appearance from Amber Benson to complete the trifecta.

If there was a weak link in these episodes, it was the Marshall and Lily plots, mainly because they were pretty standard sitcom-fare. The plot with Seth Green was your typical "old acquaintance we want to avoid is actually successful and we wind up not getting a big fat check." It wasn't a bad plot, especially when combined with "The Pit" theme, but it didn't go beyond the usual trope.

The other story is yet another new parents trope: unable to spend a night away from their child without becoming emotional wrecks. I found this storyline odd because Marshall and Lily took a long road trip with Ted in part one and didn't seem to have a problem being away from Marvin. However, I can easily forgive this inconsistency because of the awesome Marvin's Lullaby. Any lullaby that involved a tuba and a robot voice can make me forget a little thing like continuity.


And this brings us to Ted. They finally remember that Ted is an architect and give him two architect-themed stories. The first involves rubbing his success in the face of an old architecture professor who doesn't remember him, and it's a classic Ted move. It's also very true for a lot of us. We remember those cutting remarks from fifteen years ago, while the people who said them won't even remember our names. In the end we, like Ted, must let it go.

Ted had even more letting go in the second episode when he told Robin about Barney's proposal. Not only that, but he was less concerned about his crowning glory, his addition to the New York skyline, and more concerned with making sure Robin was happy. This is the Ted I've been missing, the Ted who is more worthy of The Mother than he's been in years. Ted the romantic, the matchmaker, who even though he hasn't met his own Mrs. Right, he wants others to find their matches.

This is why I'm glad he didn't listen to Marshall, who told him to be selfish. I get that the writers needed a foil for Ted, but Marshall is usually Ted's conscience in these situations. When Ted is making healthy life choices, Marshall should be the one encouraging him. It's a minor character inconstancy that didn't bother me too much, but it was slightly annoying.

I loved the theme of "The Pit" for this episode. Once more, the show knows how to pull off a theme, especially with the reveal that when we have someone else in the pit, the person who's really down there is us. We got to see a lot of growth from everyone, and I liked the montage of ladders as our friends let themselves out.

Finally, I liked the proposal. I'm not ashamed to say I teared up a little when it was happening. (I'm a sucker for a good proposal.) This scene was a beautiful payoff, and I loved Barney using his playbook one last time. His statement that this is the final page he'll ever need was pitch-perfect, and the crowning moment was when he told Robin to flip it over.

A show is at its best when what you see wouldn't be possible on any other sitcom, and How I Met Your Mother is no exception. In no other universe would picking up a step-by-step proposal setup be nearly as emotionally satisfying. Here, though, it means everything because of who Barney is and what that playbook means to him. It's the end of an era and the beginning of Barney as a man who wants to settle down.

It is a satisfying conclusion to the mystery of how and why Robin and Barney are getting married a little ways down the road, and it says good things about what we might expect when we finally get to that moment we've all been waiting for, when Ted finally meets The Mother. Last week I was dreading it, afraid of how they might screw it up. This week, hope springs eternal, and I can't wait to see how it all turns out.

Here's hoping the rest of the season is this strong or even better. See you in 2013.

Read more of my 'How I Met Your Mother' reviews here
Posted by Charles B. French at 7:54 PM

Email ThisBlogThis!Share to TwitterShare to FacebookShare to Pinterest
Labels: Episode Review, How I Met Your Mother, The Final Page