How I Met Your Mother: "The Pre-Nup" 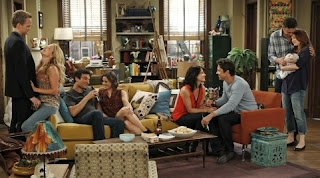 Quick Review: They certainly not wasting any time this season.

Episode Synopsis: Barney's extensive and comprehensive prenup leads the guys to put forth their own relationship principles, which their significant others do not find agreeable. Meanwhile, an incensed Quinn responds with her own prenup. -tvguide

There's major spoilers ahead, so you might want to watch the episode first before reading this. Otherwise,  there's a pretty big spoiler penalty, and you wouldn't want that. It could cost you all your suits, and when you go to suit up, all you'll have to wear is Aquaman underoos. That's also part of the penalty, because really, no one wants to wear Aquaman underoos. Not even Aquaman.

Worst Episode Moment: Finding out who Robin is winking at.

Best Character Progression: Barney, a little ways down the road, not needing a Pre-Nup.

Worst Idea: Everything in Barney's Pre-Nup.

Best Sagat Narration: "Everyone was happy as can be, which means there are absolutely no good stories."

Best Honest Question: Do you trust me?

Any hint about The Mother? I'm pretty sure she doesn't own any ferrets.

What do we know about The Wedding? It's going to be Legendary!

Do we like Ted this episode? He's trying to do the right thing with Klaus, but he's being all Ted about it, meaning he doesn't think things through even five minutes into the future. It's a wash.

Overall Opinion of the Episode: That happened fast. I was expecting them to wait until November to break up Barney and Quinn, but no, it's episode two. While last season was marking time, this is making up for it. I'm glad they decided not to drag things out. We knew they were going to break up, why prolong it?

I like why they broke up. It wasn't because of cheating, at least not directly. They broke up because of a very real issue that anyone dating either of them will have to deal with: trust. Quinn can't trust a man who slept through half the phone book, and Barney can't trust a woman who gives lap-dances to the other half.

Their trust issues were going to come out, and I liked how the dueling pre-nups were the way they expressed their insecurities about the relationship. What began as a slightly annoying running gag throughout the episode suddenly represented the one hurdle they couldn't overcome. This wasn't a contrived break-up; it was an inevitable outcome, and that's why I liked it.

Klaus living with Ted and Victoria is a bit contrived, but it is in keeping with the kind of person Ted is. He wanted to make sure Victoria left a note, so of course he'd make sure Klaus got on his feet. After all, the man's engagement had just broken up, what better way to get over it than to shack up with his former fiance and her new boyfriend in a place with very thin walls?

I'm not sure where they are going with Klaus. He was great last episode as a dispenser of sage, German wisdom. This week he's the eccentric nudist with a gaggle of ferrets. He's become the wacky neighbor archetype, or wacky roommate to be more accurate. The actor, Thomas Lennon, is a fantastic character actor, and I can see them not wanting to let go of him. However, his character is going to wear out his welcome unless his presence is justified soon.

He might be there to take Victoria away from Ted. It would fit Ted's pattern. Stella left him at the altar because he invited her ex to the wedding. This time, Victoria leaves him because he invites her ex to stay with them. It's not a particularly good pattern, but it's Ted.

When this does blow up in his face, however it does, I'd like it to finally set him straight and put him on the right path.

The other plots were tolerable but mostly there to add to the couple tension. I liked Lily and Marshall arguing about how to play with the new baby. (Especially since they are out of the stupor enough to have drinks with their friends and plan elaborate pre-nup documents. ) It's a natural argument their characters would have, especially with Marshall's upbringing, and it was nice to see the Eriksen clan together again.

Then there's Robin. You'd think we'd have known about her narcissistic television fixation before now, but that would imply that her latest quirk wasn't just a writer's attempt at giving Robin and Nick something supposedly hilarious to argue about. Unfortunately, the joke fell flat because it was out of left field. There is so much more they could have argued about that would have been in keeping with Robin's character. Instead, they decided to just make her ridiculous.

This show seems to have forgotten, again, that Robin is an interesting character. When dating Ted, she was actually three-dimensional and the show didn't have to rely on cheap gimmicks to create conflict. (And no, Robin Sparkles wasn't a cheap gimmick, it was pure awesome and actually in character for Robin.) Robin then was complex and fierce, struggling with the idea of being in a relationship and maintaining her independence. Robin now isn't as compelling.

This show is always at its best when it lets its characters be themselves. There's still room for many funny moments, and the best ones aren't contrived, they are natural. That's why Barney and Quinn's break-up worked for me, because they came by it honestly. I can only hope what brings Robin and Barney together, not to mention Ted and The Mother, is just as honest.

Read more of my 'How I Met Your Mother' reviews here
Posted by Charles B. French at 9:20 PM

Email ThisBlogThis!Share to TwitterShare to FacebookShare to Pinterest
Labels: Episode Review, How I Met Your Mother, The Pre-Nup