How I Met Your Mother: "Farhampton" 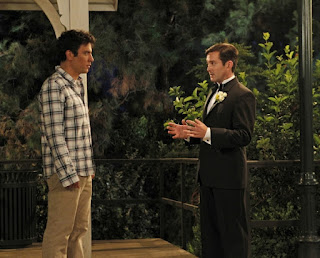 Quick Review: An annoying start but a promising finish.

Episode Synopsis: The sitcom rings in Season 8 with wedding bells for the impending nuptials of Barney and Robin, but concerns that one or both of them will get cold feet cloud the happy time. Meanwhile, all the matrimonial jitters trigger Ted's memories of Victoria's wedding day and how he insisted that she leave her fiancé a note after deciding to leave him at the altar. -tvguide

Spoilers ahead, so you might want to watch the episode before you read ahead. If you need to leave the room so that you aren't spoiled, you may be tempted to climb out the window and shimmy down the drainpipe. I get it, that seems like a good idea. Well, let me assure you, it isn't. Sure, you'll get out the window easily enough, but that's when you'll learn the horrible truth: you don't have a drainpipe.

Worst Episode Moment: Ted deciding that leaving a note isn't such a big deal because it's just too inconvenient.

Best Character Moment: The Mother gets out of the cab.

Worst Character Interaction: Zombie Marshall and Lily trying to talk to anyone else.

Best Character Progression: Ted, starting to come to the realization that he's with Victoria for the wrong reasons.

Best Sagat Narration: "Unfortunately the when of it was still a little ways down the road. But the where of it... "

Best Callback: A bass guitar and a yellow umbrella.

Most Common Courtesy: When you run out of a wedding, you leave a note. Just ask Miss Manners.

Biggest Question: Is anyone actually going to get married?

Any hint about The Mother? She's still playing bass guitar, still has the yellow umbrella, is waiting for a train in Farhampton, and is about to meet Ted.

What do we know about The Wedding? Barney is trying to leave through the window and Robin doesn't want to go through with it.

Do we like Ted this episode? He's starting to figure things out about himself, so if this fling with Victoria finally sends him in the right direction, I'll be happy. I can only hope the Ted we see a little ways down the road is a little bit smarter and wiser.

Overall Opinion of the Episode: It had a shaky beginning and I was getting a little annoyed at everyone, both in the present and future. Thankfully, the ham-fisted writing was nowhere to be seen and I am more than a little bit curious to see how Barney and Robin's wedding goes. But that's still getting teased. For the most part, we're back in the present.

I get what they're doing with Marshall and Lily, though it got a little irritating towards the end. I wonder if they're going to do the same things with the new parents as they did with Lily's pregnancy, hit all the typical new parent experiences and dial it up to 11. It can be cute when done right, but I fear more "pregnancy brain" is on the way, which will take up valuable time which could be spent actually letting Marshall and Lily be awesome.

Marshall is still an environmental lawyer. I want to see him save the world. Lily is still an artist. I want to see her create new works of art. I want to see both of them doing this for their kid, in their own wild and crazy way. I hope this season lets them still be who they were in seasons past, not relegated to the "parents with a new kid" role.

We're starting to see the cracks developing between Barney and Quinn, whether it's Robin-induced jealousy or what does and doesn't count as cheating. Now that we know they don't end up together, the only question is what causes the inevitable breakup. And since we know Barney and Robin are getting together again, this is going to be another repeat of last season, instead this time it's Quinn and Nick instead of Kevin and Nora.This could be bad or good depending on how the show handles it.

When it comes to pairing up two leads, it's trickier than it sounds. It's more than just deciding that they should be paired up. They need a reason to be together other than the script said so, and the audience has to buy them being together. If it's too contrived or feels like a rehash of something the show already did, it's going to fall flat. Especially when it involves breaking up from their placeholder relationships. (Again)

I want to see Robin and Barney get together in a real and genuine way, not just when the script says for them to switch partners at the sitcom square dance. I do think the show played it just about right. We got to see a nice scene of Robin finding Barney's box of mementos, proving that he never let go of Robin. It was the kind of moment this show used to be good at, and I'm happy to see it again. If this is what we can expect for the Barney/Robin relationship, then I'm in.

I have to admit, the beginning of this episode irritated me, and I feared that we were in for yet another long stretch of just filling time, but it seems that we're actually making forward progress, not only with Barney and Robin, but also with Ted. I was not a fan of Ted and Victoria running off together last season, but I offered a caveat; if this led to Ted finally figuring things out and becoming the man worthy of the mother, I was good. While the long process of writing and delivering the note didn't impress me, I did like his conversation at the end with Claus.

Ted is staring at a man who could be him, so ready to be married that he misses the most important piece - it has to be with the right woman. This could serve to be that wake-up call that makes Ted finally get his life together and become the man worthy of meeting The Mother. We've seen bits of that men here and there, but now it's time for him to take the stage front and center, because The Mother is waiting.

I admit, I was so thrilled to see her step out of the cab, bass guitar in hand, holding her yellow umbrella. The rain, the music, everything about that scene was perfect. It's the start of what could very well be a meeting worth the eight year wait, the moment everything has been building up to. They definitely got off on the right foot, and I'm excited about where it goes from here.

While this wasn't a perfect episode, it set the stage for what hopefully will be a great season and a fitting end to the story we've been watching unfold these past seven years.

Read more of my 'How I Met Your Mother' reviews here
Posted by Charles B. French at 8:57 PM

Email ThisBlogThis!Share to TwitterShare to FacebookShare to Pinterest
Labels: Episode Review, Farhampton, How I Met Your Mother