How I Met Your Mother: "Now We're Even" 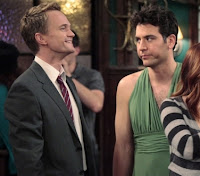 Quick Review: Three good stories are crammed into an episode and only one really pays off.

Episode Synopsis: With Ted settled in a new apartment, Barney decides they should be bros-about-town and go out every night. Meanwhile, Lily has a risqué dream about someone other than Marshall; and Robin's career hits a high point. -tvguide

Spoilers ahead, so watch the episode before you proceed. Of course, I get it if you don't have time to watch. Perhaps you've got a legendary night of your own planned, and your extremely extreme schedule just can't bear anything else added to it. For you, watching this episode might be the proverbial "wafer thin mint," and it would cause your entire evening to explode. We wouldn't want that, now, would we? So if you don't have time to actually watch the episode because this is "The Night We Tracked Down Joel Schumacher and Made Him Apologize (He Knows What He Did)," then I guess I can live with it.

Best Character Moment: Barney admitting why he wants all his nights to be legendary.

Best Character Interaction: Barney and Ted arguing over who has the most points.

Best Advice: Ranjit telling Marshall that he doesn't get to be crazy anymore.

Best Sagat Narration: "You know, I'm probably not going to get to that later. They had a song, it didn't suck, the end."

Best Sandy Moment: "Sandy, you were IN the harassment video."

Best Callback: We finally learn why Ted wore a green dress. (But not a real green dress, that's cruel.)

Dirtiest Thing Ever Uttered on the Show: "Yes, while 'The Cos' smurfed-off in the corner. We all remember."

Any hint about The Mother? If she's Ted's size he just doubled his wardrobe..

Any hint about The Wedding? It might be very soon, given how much Barney hates Quinn's job and wants her to quit.

Do we like Ted this episode? He got a girl's number while wearing a dress to make his best bro feel better. What's not to like?

Overall Opinion of the Episode: Last year's The Mermaid Theory is best forgotten, at least for any part of the episode dealing with Zoey. The one part of the episode I actually liked was when Future Ted got his timeline mixed up and accidentally told a story that happened a year later when Lily was pregnant. It ended with him promising to get to why he showed up at MacLarens in a dress. This episode is when Ted finally gets to that.

I do have to respect this show for an incredible sense of foreshadowing. It's pretty brilliant in a way, because it gives us smaller events to look forward to as we wait for Ted to FINALLY tell us how he met his future wife. From "The Goat" to "The Wedding Bride," we get little clues about what's in store for us just down the road. Seeing these events pay off give us some sense of satisfaction. It can also be an indicator of how well they'll be able to pull off Ted meeting "The Mother."

That's the double-edge sword. When you hype up an event long enough, there's no way it can live up to expectations, and I fear that's what will happen when Ted finally meets the girl of his dreams. However, while that's the fear, this episode helps soothe me somewhat because I absolutely loved why Ted was in a dress. He was helping out his lovesick friend, Barney. That I did not see coming, and it really turned this episode around for me.

Barney's obsession with telling everyone he's dating a stripper was incredibly annoying until we realized that it was incredible over-compensation. He hates that the woman he loves is a stripper. It's killing him, and that's why he's planning these incredibly fun and well-titled nights with Ted. He needs a distraction, because he can't bear to slow down and be alone with his thoughts, especially between 9pm and 4am. He loves Quinn, and you know this love is true because none of Barney's plans involve womanizing of any kind.

Ted's motivation in putting on the dress was perfectly in character and not at all what I expected. It was a sweet moment that bodes well for the final payoff. This is the kind of romantic soul I can root for again.

Neil Patrick Harris is an amazing performer, and the reason Barney is such a great character is because he's not a one-note "Wacky Neighbor" archetype. Harris plays him with equal parts scoundrel and suffering soul, and it makes it easy to root for a character who would probably be in jail in real-life. Barney's pain runs deep, from his father issues to his desire to be more than just a womanizing playboy, and Harris can transition from one to the other with ease.

Of course, it's not like Robin, Lily, and Marshall were lacking in things to do. Robin's plot felt like it was shoe-horned in from another episode, because her having to pilot a helicopter to safety is actually a pretty neat story, but it all happened as the C-Plot of this episode, and so it was over before it began. I'd have preferred to see more of her struggle for recognition at work (and be less whiny about it) because then the payoff would have felt earned.

Lily's story was quite interesting, and not just for introducing a new color to the palate. The crazy sex-dream about someone you'd least suspect is probably taken from Hannigan's real-life pregnancy experiences, and having Ranjit be the subject of those dreams was a clever reveal. Unfortunately, like Robin's plot, it felt crammed in there and not fully explored. We got an argument, two quick conversations, and Marshall and Lily made up at the end.

Ultimately, each of the three major plots could have carried the episode, and instead all of them were relegated to B-plot status at best. There was no clever inter-weaving of stories, though the show did do it's very best. In the end, at least the answer to why Ted was in a dress proved the most satisfying. This show works best when it operates around one central story, and I'd like to see it get back to that. otherwise they try to do too much and it doesn't leave us with much of anything.

Read more of my 'How I Met Your Mother' reviews here
Posted by Charles B. French at 7:37 PM

Email ThisBlogThis!Share to TwitterShare to FacebookShare to Pinterest
Labels: Episode Review, How I Met Your Mother, Now We're Even