This review of Muppets Most Wanted 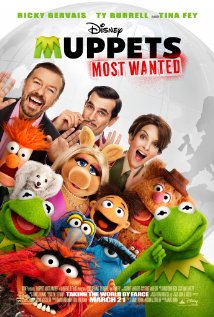 Quick Review: A worthy entry to the Muppet movie franchise. It's fun, funny, and will entertain children of all ages.

Full Review: The thing about nostalgia is that it only gets you so far. 2011's Muppet revival managed to thread the needle between nostalgia and making the Muppets relevant to the 21st Century. This collection of shorts and television appearances culminated in the amazing movie that was The Muppets. The movie's story was a classic: we need to get the gang back together. At the end of the movie, of course, we see that the gang is indeed back together. Credits roll. The end.

But it wasn't just the end. It was the beginning of an entirely new Muppet franchise. And therein lies the problem. Once the Muppets were back, what happens then? Where do they go from there? The first movie didn't have to answer that question. It didn't need to, as it was mainly focused on celebrating the past and letting us know that these characters are still relevant. The sequel, however, has to do the heavy lifting of continuing on from there.

This is why so many movies end with that crowning moment of triumph. You want to go out on a high note and end as strongly as possible. But what happens next? That's the big question, not only for the Muppet characters in the movie, but for the Muppet franchise in general. Now that they are back, what now? Can they transcend the nostalgia of people my age who grew up on them and become their own entity for a new generation?

Overall, I think this movie answers that question, and the answer is yes. The story immediately picks up from the closing shots of the last movie, as the director yells "cut" and the Muppets congratulate themselves on their first successful movie. The Muppets always play fast and loose with the fourth wall, and you never know if what you are seeing is the "real" story or a performance. So we're never sure if the success of getting the gang back together was indeed to put on a show to save the theater, or to make a movie about getting the gang back together. In the end, it doesn't matter. What does matter is what happens next.

Thus we're introduced to the main story of the new film, the Muppets go on a world tour, unwittingly manipulated by an evil Badguy (that's his name) played wonderfully by Ricky Gervais. He is but one of several human performers who play off the Muppets brilliantly. Whether it is Ty Burrell's buddy cop routine with Sam the Eagle, or Tina Fey as the warden of a Siberian Gulag, I enjoyed everyone's antics. The movie managed to balance out each of these new character's stories without crowing out the Muppets themselves. There's a lot going on in this film, but you never feel that it's too much.

The main story involved Kermit being replaced by an impostor. The "bad frog" tries to hide in plain sight on tour, using it as a cover to plan the greatest heist of all time. Meanwhile Kermit finds himself locked away in Tina Fey's gulag. Will the gang eventually figure it out? Will Kermit's imposter be exposed? Will there be a fantastic finale full of singing, dancing, and action? Spoiler alert: yes. But just because the end is predictable doesn't mean getting there isn't enjoyable.

The one thing this movie does well is ramp up the humor. From the hilarious inmates of the gulag to the Muppet antics as they cross Europe, this film is not starved for laughs. There are many subtle jokes, running gags, and jokes that span the length of the entire movie. Throw in many, many celebrity cameos and you have a movie that will appeal to all audiences. There are jokes that the kids are too young to understand, just as there are cameos people like me are too old to understand. The Muppets themselves are as strong as they ever were, despite the fact that many of them are no longer voiced by their original performers.

The one Muppet who seems out of place is the newcomer from the last movie: Walter. And that's because Walter's character was based on his love of the Muppets and his conflict with his brother, played by Jason Segel. He was central to the last film. This time he's not given much to do except be a voice of reason. While he was an integral part of the first movie, he's more forgettable in this one.

And that reveals the one flaw in this movie. It didn't quite have the heart of the last one. The 2011 film was all about what it means to be a Muppet, and what the Muppets mean to the world. Segel, who helped write it, understood the Muppets all to well, being a lifelong fan. This time, while there were plenty of laughs, the movie didn't get to the core of what it means to be a Muppet in today's world, to care for people you consider family.

While the songs of this movie don't quite reach the iconic heights of "Life's a Happy Song" or "Man or Muppet," they are still very fun, clever, and enjoyable. Whether it's a tribute to making a sequel, the Kermit imposter's ballad, the duet between Ty Burrell and Sam the Eagle, or Tina Fey's number, there's something for everyone to enjoy. The Muppets are practically synonymous with singing, and this movie is not hurting for enjoyable songs.

So while this movie isn't quite as moving as the last one, that doesn't mean its still not a worthy entry to the Muppet movie franchise. It's still the classic Muppet sense of humor, full of cleverness, zany antics, great music, and multi-level humor. Fans of the Muppets will not be disappointed, and if you aren't a fan, you will still have a good time.
Posted by Charles B. French at 10:32 AM