This Review of 'The Muppets' 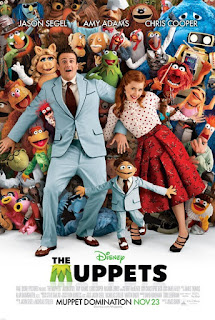 Quick Review: If you love the Muppets, you must see this movie.

Full Review: My original plan for this review was to simply compare this film to the past Muppet movies and see if it holds up. I was going to treat this like just another movie, but after watching The Muppets, I realized that such a perspective would miss the point entirely.

I could just tell you how great this film is, how it's very funny, witty, moving, and quite possibly second only to 1979's The Muppet Movie in terms of greatness. All of those statements are true, and if that's enough to make you go see it, by all means stop reading here, see it, and then come back to read the rest of this review. It'll still be here, and you'll understand why this isn't just another rehash, remake, or reboot. This is something we've never seen before from the Muppets, and ever since I walked out of that advance screening, I've been trying to wrap my head around why this film was great. I hope this following review does the film justice.

This film isn't like the other Muppet movies, it's about those other movies. It's also about something else, something those other movies never thought to address: the fans. That's what Jason Segel understood when he wrote this movie, that's why this film stays so incredibly true to Jim Henson's vision that you'd swear the man was still involved. Segel wrote this with the fans in mind. This movie is for them, for us, those of us who never stopped believing in the Rainbow Connection.

That's why the story doesn't start with Kermit or any of the Muppets. It starts with two fans, Gary (Segel) and his brother Walter, a muppet. These two grew up loving The Muppet Show and everything to do with the Muppets. Now they are both adults and still very much Muppet fans, and this movie follows their quest to find the Muppets and have them reunite for one more show. We see a lot of this film from the perspective of fans who grew up with these characters and miss them since they aren't around much anymore. This movie is about what it's like to love the Muppets and what the world is missing without them.

The world can be a cold cynical place, but cynicism never had any place in Henson's universe. The Muppets were always about finding the joy and magic in life, about realizing that when things go wrong you can always count on your friends and family to support you. This movie understands that, and it understands what it meant for people who grew up knowing this truth. It's for those of us who look at the world today and long for some honest joy.

That's why this is a movie for grown ups like me. Yes, your kids will love it, but you will be moved when you realize that the joy and magic didn't leave us, we just had a hard time seeing it. After you watch this movie, your kids might ask you about a few jokes that you loved and they didn't get. I suspect, though, that a few of you parents will have to explain your tears to your children. If you are at a loss for what to say, tell them this: "You'll understand one day when you watch this with your children."

This movie sets out to answer a very important question: Do the Muppets still have a place in the world today, or are they an artifact of yesteryear? That's what all the characters struggle with as they embark on the tried and true plot of getting the band back together. Is it worth it to reunite the old gang if no one cares? Does anyone even miss them? Are they even relevant in an age of product placement and CGI?

The answer, of course, is a resounding yes. The Muppets discover that they are still as funny, witty, and entertaining as ever and that there's still a place in the world for Kermit, Miss Piggy, Fozzie Bear, Gonzo the Great, Rowlf, Animal, Scooter, Electric Mayhem, and every other Muppet big and small. All they needed was someone to believe in them and remember what made them great in the first place.

This movie isn't just about revisiting the past, it's about moving on and letting go. It's about seeking new fortunes and taking new risks. That's not only what the characters of Gary and Walter have to do, that's what Segel and everyone else behind this movie had to do. This movie couldn't just remain rooted in the past, it had to move on, grow a little, and stake new ground. That's why it works, because they figure out that moving forward, though scary, doesn't mean abandoning all you've known and loved, it means you allow it to grow and be even better.

I think about two recent movies that struggled with the same questions: Superman Returns and J.J, Abrams' Star Trek. The Muppets could have gone the Superman Returns route, wallowing in nostalgia to the point of stagnation. Instead, it followed the lead of Star Trek, acknowledging its source material, paying heavy tribute, but then not being afraid to let go and move on to a brand new place.

The Muppets isn't just about the story and the themes, it's also about the performances. Every Muppet movie has its human characters, and this movie gave us some of the best human performances we've seen. Segel is full of earnestness and joy. He's just a big kid struggling with growing up and hanging on to his childhood. He's just so lovable that you can't help but root for him.

His girlfriend Mary, played by Amy Adams, is equally earnest, but she's not a simple character. Her struggle in the story is that Gary spends so much time with Walter and The Muppets that he cannot take their relationship seriously. It could have been easy to make her belittling or cruel, to cast her as the villain who takes our hero away from the people he loves. Instead, she's just human and sympathetic, and her issues with Gary and their relationship are very understandable. She represents the balance that we all must learn as we get older. How do we become grown-ups while still holding onto our childhood? It's a fair question to have to answer, and the film handles the issue perfectly.

There's plenty more human performers, and I won't spoil them for you because there's a few fantastic cameos. Every single person seemed to get what this project was about and never made it about themselves. They simply rolled with the Muppet mayhem and the film is better for it.

But really, we're here for the Muppets. I can tell you that these were more than puppets onscreen. In fact, at no time do you remember that Kermit is just a hand in a green, felt sock. Kermit is real, his emotional struggles and triumphs are real. All the characters are brought to life with nuance and depth, and we feel for them. This movie earns every emotional beat, from the laughter to the tears, because we buy that these characters are real.

I thought that it was fitting for a Toy Story short to precede the movie. Pixar and the Muppets represent opposite ends of the spectrum, advanced CGI to low-tech puppetry, and both understand that it's not how you build it, it's about the characters. The Toy Story short deals with many of the same issues as the Muppets, in this case it's about toys struggling with a world that abandoned them. However, it's interesting how each franchise deals with that idea. While the toys try to accept what happened, the Muppets fight back, refusing to let the world throw them away.

Because if you think this is a movie for kids, you're wrong. True, kids will enjoy it, but this truly is a movie for people like me and you: grown-ups who want to rediscover the joy and magic of the Muppets. No matter how old you are or where life takes you, it's not gone. You just need to remember you had it all along, and you need someone to believe in you, to believe that you can find it again. This, I think, is the great gift the Muppets give us. They believe in us, in our power to find that magic and change the world.

This movie gets it, and after you see it, you will too.

And if you are a grown up but don't have kids to use as an excuse to go see The Muppets, go anyway. My wife and I weren't the only childless couple there at the screening. (A big thank you to Ain't It Cool News for making that happen, by the way.) There were plenty of couples there without kids, unless you count the fact that we were all still kids at heart. I also very grateful to my wife for helping me get my thoughts together about this movie, as she, too, was the kind of Muppets fan this movie was about. She loved it. I loved it, and if you're any kind of Muppets fan, you'll love it too.

I can do more than review movies. Check out the book I wrote.
Posted by Charles B. French at 10:47 AM