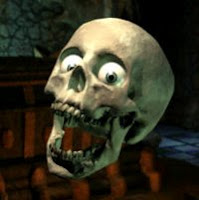 I love Halloween, and every time the tail end of October comes around, it means several things: The Great Pumpkin will air, stores are already putting up their Christmas decorations, and you’re going to see more skulls.

As a species, humans are obsessed with skulls. And why not? They’re very cool and scary. We are both fascinated and repelled by our mortality, and you never see a skull unless someone has died. To gaze upon a skull is to see death, which is why Death is often characterized by a skull.


Skulls aren’t just remains of the dead, warning signs, or odd decorations, they are characters in their own right. Today I want to talk about some of the very best skulls in entertainment. Some of these skulls are attached to something, true, but I say they still count.


read my article at thenoobnews.com

Great Skulls in Entertainment
Read the rest of my articles on The NoobNews.com
Posted by Charles B. French at 3:26 PM