This Review of Weird Al in Concert 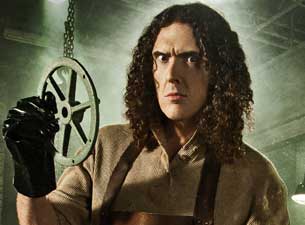 Quick Review: Go see him. It's a great show.

Weird Al is entering an improbable but welcome fourth decade of cultural relevance. Most of the acts he's parodied have come and gone, but he's still out there touring, and we are better for it. After all this time, Al has perfected the art of the concert, and if you ever get a chance to catch one of his performances, you owe it to yourself to see him live. This man knows how to entertain his fans.


His concert had just the right balance of material from his new album and classics from his 30 plus years of songwriting. If you're there for an old classic, like 'Eat It', 'Amish Paradise,' or 'White and Nerdy,' you'll hear it. (Though Al did have a hard time keeping up with White and Nerdy at times - it's a tough song.) Al doesn't just sing these songs, he performs them, dressing in costume for most of them, including parading around in a giant Peacock costume for the Lady Gaga parody 'Perform This Way.' My wife's favorite outfit was the leather pants he wore for the 'Craigslist' song - and I've got to admit, he can pull them off.

Since it takes time for Al and the band to change costumes, we had to have something to occupy our time during the breaks. Fortunately for everyone, we were treated to clips from Al's televised and movie antics over the past 30 years, including many of his "interviews" with celebrities. (clever mash-ups of existing interviews and Al asking new questions for out of context answers.) A particular crowd favorite was the scene from the cult-classic UHF in which a game-show contestant chooses a box full of nothing. (You know the one.)

But just when you think you're only going to get song-costume change-song-costume change, Al breaks out into a long medley of ten or so songs (I lost count) right in a row. Al mixed things up so we don't quite know what to expect. A crowd pleasing moment was when Al, clad in a grotesque Leisure Suit, proceed to walk through the crowd using the lyrics to " Wanna B Ur Luvr" to hit on all the women in the crowd. Since I had great seats, he came within two feet of me and my wife, but sadly, he didn't hit on her. Another time, them.

So if this guy knows how to do a stage show, can he do an encore? Oh yes, and the theme is perfect for an audience full of geeks: Star Wars. He finishes the show with "The Saga Begins" and "Yoda," which is pretty much him leading the crowd in a giant sing-a-long because we all know the lyrics.

As I said, Al knows how to please the crowd, and I was part of that crowd and I am pleased. The one hindrance to your enjoyment might be sitting next to an uber-fanboy who knows all the lyrics to every single song and happily sings along. (Can you guess who we sat next to?). Overall, though, this is one of the best concert experiences I've had, and you'll kick yourself if you pass up the chance to see Weird Al live.


I can do more than review concerts. Check out the book I wrote.
Posted by Charles B. French at 3:06 PM