This Review of the 'How I Met Your Mother' Premiere 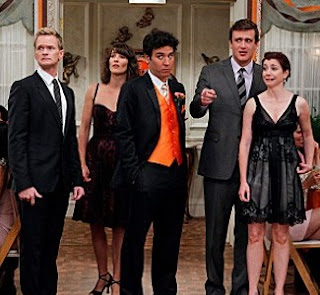 Quick Review:
They try too hard and string us along, but it's not a total loss.

Full Review:
The past few seasons have been rough for the fans of How I Met Your Mother. We'll still watch anything from seasons 1-4 in reruns (or pop in a DVD and hit play-all.) However, we're a bit more picky with seasons 5 and 6, as it marked the beginning of a decline. From the horribly handled Barney and Robin relationship to the even more horrid introduction of Zoey, it was sometimes an effort to tune in every week and/or log into Hulu. We've spent six years waiting for Ted to meet 'The Mother,' and so far all we've gotten is a foot.


Thus, tonight I tuned in with trepidation for the start of season seven. When we last left the show, we found out that 'a little ways down the road,' Ted would be Best Man at a wedding, and that was the day he meets 'The Mother.' The sixth season ended with the surprising twist (that most of us predicted) that this was Barney's wedding. We were left wondering about the identity of the bride, and this takes us to the one hour premiere...
Spoilers below for anyone who hasn't seen it.
We come to find out that Ted from the future is going to gleefully string his kids (us) along for a little while longer. And that Barney is getting married to a "bride" whose name we still don't know. (Like they were going to tell us that.) And that's about it on the big mysteries that are likely to not be revisited for the rest of the season.
So how were the two episodes? The wedding episode was the weaker of the two. I did like the buildup of how Marshall actually ruined the wedding, in that the writers decided to be clever and have Marshall's celebration of Lily's pregnancy be the culprit. The Ted autotune remix was funny.
Halfway through the episode, though, they interrupted the story to show a promo for 'How I Met Your Mother.' At least, that's what the (to be fair, well choreographed) dance routine looked like, what with all the mugging to the camera. They smashed the fourth wall with the force of four slaps, and it's only because Neil Patrick Harris and Cobie Smulders are great dancers that it wasn't a total cringe-worthy moment.
No, the cringe-worthy moment was Robin's "truth voice," which was great in concept, but grating in execution. And that's the problem with the episode and the show for the past two seasons. It's trying too hard these days to be clever. It feels forced, almost like a Family Guy style cutaway. (That reminds me of the time I pretended to be Patient Zero to pick up women.) There's a real story here that can still be sweet and funny, but they can't hamper it with this king of forced device.
What gives me hope is the second episode. It was far superior. Marshall's sweeping declarations (and subsequent wagon falling) were far more organic to the plot. I do like the idea of trying to track down those embarrassing videos that could cost you your job, because there's plenty of people who have stories to tell about that. (Me, I don't have one of those videos, because if I did, this website would have a lot more visitors, let me tell you.)
I liked Barney's attempt to win over Nora. That didn't feel forced but rather organic with a character trying to change, and whose trajectory we know (a bit.) His confessional was that combination of sincere and outrageous that NPH can pull off with ease if only they'd let him.
What gives me hope is the return of Romantic Ted, he of the clutched heart. I want to see Ted not be a complete jackass, but that romantic fool we used to love. The one who'd steal blue French Horns, make it rain, go on two-minute dates, and believe in this awful house he bought. I also want to see Ted become more of a grown up and be the man who yelled at his friends last season to do the right thing. He needs to become likable again, but that doesn't mean he needs to be perfect, just a man worthy of this incredible woman he's about to meet (sometime...eventually...)
Of course, the final twist of Victoria reappearing is interesting. You may not know that she was going to be 'The Mother' had the series not gotten a full-season order, which is why he met her at that wedding season one. (Weddings seem to be a thing on this show.) When the show was picked up, she became one of Ted's many girlfriends, who is now back, apparently.
Now that we're back into the 2011 storyline, I think I like where this season is headed. Marshall will finally get to be the environmental lawyer he wants to be, Ted is rediscovering the romance, and Barney is becoming a man who will one day marry. Let's hope that we get more of this kind of episode.
The creators, Bays and Thomas, have said in interviews that they intend the show to run eight seasons, which is a pretty good run for a sitcom. I'm hoping that in these two years, we not only meet The Mother, but also watch Ted date her, propose to her, and hopefully marry her. The show has been building up this great relationship for six years, and I want to see more than five minutes of it. At this point, I have no idea whether that's going to happen.
Still, no matter how abused I feel, I'm sticking with How I Met Your Mother until the credits roll on the final episode. I have this kind of relationship with shows. I'll stick with them long after it's clear that they just aren't as good anymore. (Or that they'll pretty much not rise above mediocrity in the best of times.) I was one of the few who watched Scrubs season 9, I tuned in for a lot more Star Trek: Voyager than I should have, and I stuck with ten years of Smallville to the bitter end. (And boy am I still bitter about that end.)
Here's hoping that gets back to the awesomeness of it's first four seasons and gives us a final two that are legen...wait for it...
Posted by Charles B. French at 7:15 PM

Email ThisBlogThis!Share to TwitterShare to FacebookShare to Pinterest
Labels: Episode Review, How I Met Your Mother