The Heart of Futurama

There you are, minding your own business, watching a show about a nitwit from the Twentieth-Century stuck in the future. He's got a beer-guzzling robot as his best friend and a crush on a cyclops. This show created by Matt Groening, who also gave us The Simpsons, is a clever, satirical send up of the present vis-a-vis the future. It's a typical fun episode, you're having a laugh, and faster than Elzar can misfire a spice weasel into your eye, the show takes an emotional turn. It floors you, you weren't expecting it, and chances are, eight to ten years later, you're still talking about it. Well, I am, but I'm sure I'm not the only one.

Find a group of Futurama fans, get them talking about favorite episodes, particularly the ones from the hallowed 1999-2003 years, and four inevitably come up. These are the four episodes that go right for that four-chambered organ you're slowly destroying with your diet. (In your defense, putting cheese and bacon on everything really is awesome.) Three of the episodes warm your heart, and when you're having a day in which Kill All Humans seems like a good action plan, these episodes will quickly change your attitude to I Must Hug a Human Right Now!

The fourth? This one stabs your heart, steals its wallet, and leaves it in a gutter to die. And yes, you know the episode I'm talking about, but we'll get to that shortly.

If you haven't seen these episodes, don't whine to me about spoilers. This show's over 12 years old, rerun to death in syndication, the DVDs are everywhere, and I'm pretty sure it doesn't take long to find them free online.  There's no excuse for not having seen these episodes, what's wrong with you?

First, we cover the three heartwarming episodes, which are not only the best Futurama episodes, but in many respects, some of the best written sitcom episodes ever. I'd rank these right up there with Slap Bet and The One Where Everybody Finds Out.


Heart-Warmer 1: Luck of the Fryish 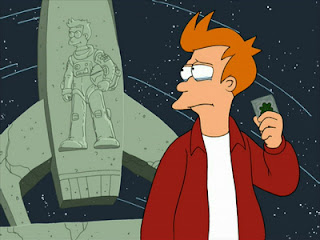 All throughout the episode, we see Fry (full name Philip J. Fry) flash back to a classic tale of sibling rivalry. I can relate, growing up with a younger brother who committed the unpardonable sin of being taller than me. Fry's brother Yancy wants everything of Fry's, including the name Philip. (Because Yancy? I get it.) Fry is especially keen on keeping a seven-leaf clover from the clutches of his brother. Because it's magic and confers awesome powers. (If you accept beer-guzzling robots, you can accept this.)

After Fry is frozen and in the future, he finds out that his brother removed the clover from its hiding place, and apparently stole Fry's name to become Philip J. Fry. Fry is incensed that his brother became one of the greatest men on Earth, stealing the life that Fry believes should have been his. Naturally, the solution is grave robbery. (At least, it was in Fallout.) Fry wants to dig up his treacherous brother and take his clover back.

As he's desecrating the grave,  Fry realizes that his brother didn't steal his name. He christened his son (Fry's nephew) with it. Because for all Yancy knew, Fry was dead and never coming back, and this was one way to try to hold on to the brother he lost and still loved dearly. Finally, he gave his son the clover, so that the child would bring that name honor.


Cue waterworks unless you're a replicant.
This is, hands down, my favorite episode of Futurama. It speaks to me. I have a brother, and I can't imagine what it would be like to suddenly not have him anymore, not even knowing where he was or what happened. Would I name a kid after him? Absolutely. Would I make you name your kid after him?  Heck yeah.  This is an episode that stands as a great tribute to brothers who love each other, and there simply is little else that can top it for me. 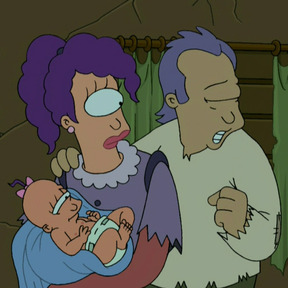 The entire series teased us with one unanswered question: when is Fox inevitably going to cancel this great show and replace it with something awful? All right, two questions. The other was: Where did Leela come from? This episode answered that latter question, and Fox didn't take too long to answer the former.

Throughout the series we simply believed that Leela was an alien who'd been abandoned on earth and raised in an orphanage. Leela was always searching the heavens, when in fact, the answer wasn't up, but down. (dooby doo down down) She wasn't an alien, but a sewer mutant. And as big reveals, this stands out to me as one of the best, not only for a jaw-dropping answer that makes sense, but also for the emotional backstory.

Apparently, mutants aren't exactly accepted on earth and are forced to live in the sewers. When Leela was born, she was almost perfect, save the one eye, and her parents didn't want her to suffer their fate. So, they gave her up for adoption, hoping that people would accept her as an alien and she'd have a chance for a normal life.

So for some of you, there's one thing that can top brotherly love. The love of a parent for a child. Could you do what Leela's parents did? Could you give up your child so she could have a better life? What kind of incredible, selfless love can do that? Some of you may know, as anyone who's ever given a child up for adoption will know. And that final montage, showing her parents still looking out for her as she grew up, always there, only being able to love in secret, love from afar, is just perfect. In a world of aliens and mutants, it shows us the pure power of a parent's love. 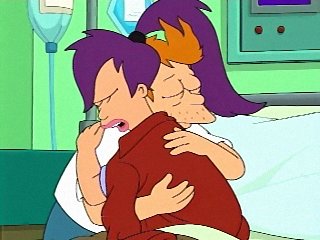 Leela believes that Fry is dead, thanks to some space bees. (Yes, bees that live in space. Apparently you can't get away from them.) However, she starts to go crazy and believe that he's still alive. She keeps seeing Fry in her dreams, and every time Fry tells her to wake up. She doesn't want to, not wanting to lose him. Turns out, Fry's death was an illusion caused by Leela being attacked by the space bee, and she's been in a coma.

Every time Fry told her to wake up, that was him at her bedside, never leaving, never giving up, never letting go of Leela. Finally, she hears him and wakes up for real, this time seeing Fry in the flesh.

Fry loves Leela, and while it's played for laughs most of the time, here we see that this love is real. Fry sits by her hospital bed every day, talking to her while she's in a coma. This might be one of Billy West's most amazing performances, Katey Sagal as well. Leela is trapped in her mind, frightened and scared, and Fry is pleading for her to wake up. In the end, love isn't shown by extravagant gifts or feats of daring, but it's when someone who sees you in a deep, dark pit and dives in after you.

So again, it's love. The three episodes above were about love, between brothers, parents and children, and a man and woman. The final entry is also about love, in many ways the most faithful of loves, the one love that will stand the test of time like no other. The love between a boy and his dog.

And that brings us to the final entry on this list, the Watership Down of Futurama, known as both a great episode and an icepick to the heart in animated form. 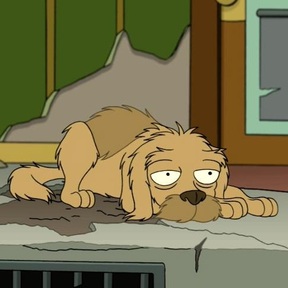 If I ever had the chance to talk to the writers of this episode, I would have one question: why?

The Futurama equivalent of a Sarah McLachlan Animal Cruelty commercial, as soon as I see even a hint of this episode, I flip the channel. If I happen to catch the end of it, I need three hours of MythBusters just to cheer me up again.


For those of you who've never seen this episode, it's about Fry discovering the fossilized remains of his old dog, Seymour. Since it's the future, there's some scientific mumbo-jumbo about cloning the dog and bringing him back to life, with his memories intact. (SCIENCE!) Fry is very excited, and we flash back to see a very loyal dog (yes he is!) who is best friends with Fry. Sadly, Seymour and Fry are separated because Fry was frozen.

Fry is absolutely enthralled with the idea of getting his dog back, until he learns that the dog lived many years after Fry's disappearance. Fry decides to not bring his dog back, believing that his dog had moved on and must have had a great life with another owner. So perhaps this is an episode about moving on and letting go. It could have ended there, but no. No it didn't.

We get to see the life that Seymour had. Right before Fry went off and got frozen, he told Seymour to wait for him, he'd be right back. Fry never returned, and the final shot of the episode is Symore waiting and waiting and waiting, never moving from the spot, never giving up hope that Fry would return. Seasons change, years go by, and the dog keeps faithfully waiting until he dies. Credits.

That's how it ends. Really. That's the ending, and I still don't get it why they did it. If you ask them, perhaps they thought the subject of those Fry left behind was worth exploring, it worked so well in Luck of the Fryish. This time, though, they decided that the best way to address the topic was to depress everyone who ever had a dog, loved a dog, pet a dog, or looked at a picture of a dog. Here we have what is the most faithful of all companions, because a cat wouldn't have waited five minutes, and we've come to know and love him. Does he get to see Fry again, after literally dying of exposure waiting? No, he does not.

I know some writers who need to be smacked with a rolled-up newspaper.

To be fair, as a way of apology for this episode, they corrected it in the Futurama movie Bender's Big Score. In that movie, thanks to time travel, Fry manages to duplicate himself and send that duplicate back in time to the day after he gets frozen. And so now, in the new Futurama timeline, Seymour only waited a few hours and got to spend the rest of his life with his best friend.

It's clear that after being un-cancelled, the writers immediately set about fixing what happened to Seymour, because if they hadn't, then they'd be apologizing for this episode for the rest of their lives.

And quite frankly, they still ought to.

I can do more than talk pop culture. Check out the book I wrote.
Previous Fun Friday Articles: