Sexual tension is the bread and butter of many dramas and sitcoms. Week after week, the two characters trade barbs and tease the audience with “will they or won’t they” situations in which they come so close to getting together but never quite take the leap.

The classic example of this show is Moonlighting, starring  Bruce Willis and Cybill Shepherd. Much of the series’ appeal was the tension between the two leads, and the show was never more popular then when they were bickering.


However, Moonlighting is also cited as a show killed by the two leads answering the “will they?” question with a definitive “yes.” Whether that’s the true reason for the show’s decline in ratings and quality is up for debate,  but ever since, series decline after two leads get together is referred to as the “Moonlighting Effect.” This is why many shows are leery of letting their characters get together.

Fortunately, not all series suffer when the leads finally resolve the sexual tension, and some actually get better because of it. Today I’m going to talk about six such shows that escaped the Moonlighting Effect.

read my article at thenoobnews.com 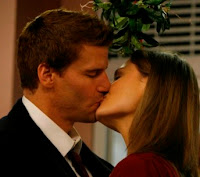 Six Couples Who Didn’t Kill Their Show
Read the rest of my articles on The NoobNews.com
Posted by Charles B. French at 11:29 AM